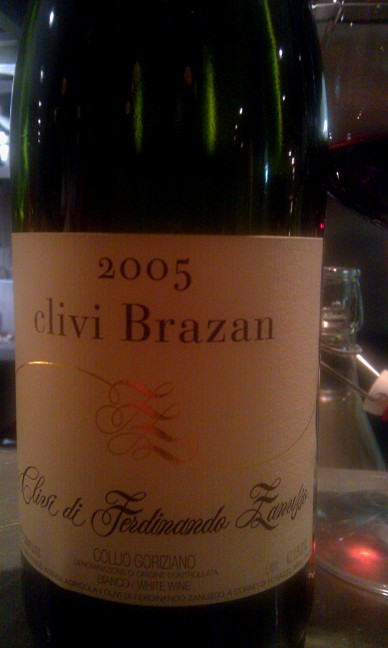 A very fine wine, a not so fine picture (thanks HTC!)

Mrs. Claret and I have developed a cunning modus operandi for eating out at fine restaurants – rock up to the hottest ticket in town, without a booking, but at a slightly non-standard time (perhaps 6.30pm, or 9pm). Accept any seat, even if it is at the counter (which is frequently the case). Think you can’t get a table at Bocca di Lupo for love nor money? Think again!

Last night, we “dropped in” to Zucca, in Bermondsey, and got ringside seats with not only a good view of the open kitchen but also the opportunity to salivate over multiple vintages of Sassicaia and Ornellaia, stored just above the counter.

This Italian yearling has shot from nowhere to receiving almost unanimous rave reviews, for its very high quality Italian cooking and an all-Italian wine list of herculean proportions, but lilliputian pricing. We weren’t disappointed with our starters of fresh (and uncooked) peas with mint and pecorino, and the most wonderful lupini clams with parsley and lemon. In need of something fresh and zesty to wash them down, we went for Somellier Gianfranco’s recommendation of an Alto Adige Chardonnay/Sauvignon Blanc/Pinot Gris blend and a Grechetto from Marche (Central Italy). The Terlaner Classico (Alto Adige) particularly impressed , with body and weight from the chardonnay but terrific freshness and a hint of minerality.

With our mains on the table – Wild Scottish Salmon, cooked to perfection with some pinkness in the middle and beautiful crisp skin, we needed something slightly more serious, and Gianfranco was again on hand to recommend a favourite wine, I Clivi’s Brazan 2005. Brazan is a vineyard in the Fruili region of North-East Italy, and this wine is 100% Tocai Friulano. At first sniff, you could almost be in Côte de Beaune territory – there is something exotic and spicy (perhaps cinnamon, or allspice) that suggests this wine has seen some oak. That is not the case however – old vines and 6 years bottle aging have created the most wonderful richness, body and complexity. This was a wine that you couldn’t pin down. What started out as ripe apple and green fruits (with that slightly spiced note), became honeyed and luscious on the finish, but with also some wet stone/mineral hints. Needless to say, the length was long, and the overall impression quite outstanding – a glass to be pondered as well as drunk.

Moving onto a plate of Italian cheeses, we were able to compare two very different expressions of Nebbiolo – first, a ten year old Barolo with an almost oxidative nose (raisins, prunes and a medicinal edge), transparent tannins and a lighter than air finish, the second, an utterly charming, perfumed example from Carema (a Northerly output of Piedmont). The 2006 Produttori di Carema had excellent acidity, bags of red berry fruit and the wonderful floral finish which is so often missing from lesser examples of this grape.

I cannot wrap this review up without mentioning the moreish Affogato (vanilla ice-cream with a shot of expresso poured over it), and the boundless hospitality we received. This is a restaurant with real heart to back up its considerable ambitions, and we will be back – especially as Gianfranco mentioned that there is the possibility of Ornellaia by the glass in the near future!