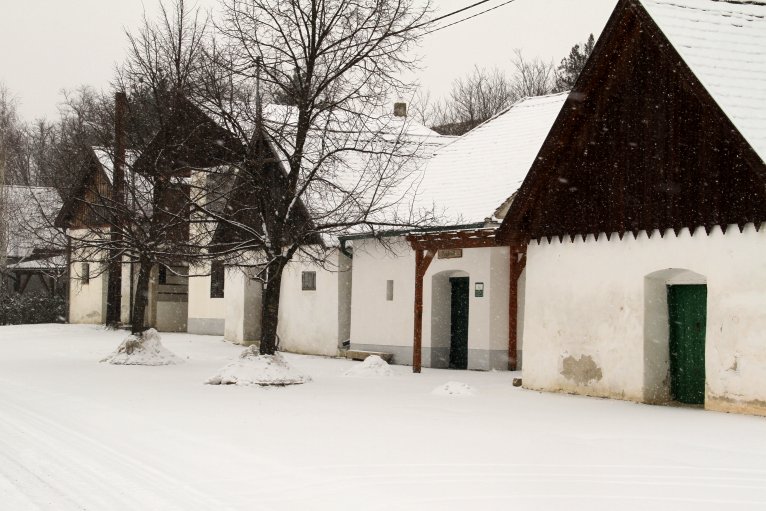 Ask most Austrian winemakers about their country’s “Appellation Controlée”-like DAC regulations and you’ll be lucky if you get so much as a luke-warm response. Few are comfortable with the fragmentation, label confusion and lack of consumer recognition that the nine regional DACs have as their current legacy.

Austrian wine marketing board head honcho Willi Klinger is adamant that Austria needs to get beyond the restrictions of varietal labelling – and he recounts a useful anecdote about the seemingly impressive Austrian section in a Kentucky winebar, where he found a Grüner Veltliner that on closer examination of the back label turned out to be Hungarian.

Whatever the potential pitfalls, single varietal wines still form the core of most Austrian wine brands. Even the large North Easterly Weinviertel region, home to the first DAC created in 2002, seems to struggle with the adaption to Romanic or origin-lead labelling – versus so called “Germanic” labelling, which prefers to list variety, sugar levels and so forth. This is certainly not due to a lack of defining character or quality, as I discovered during a recent visit. 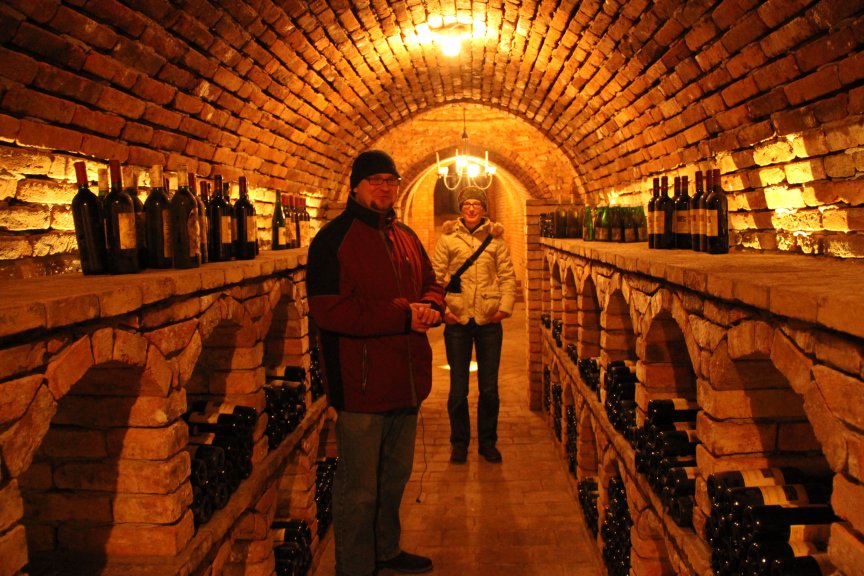 Norbert Bauer is a man unafraid of conundrums – he produces modern, accessible wines, at an attractive price point, yet likes the “determination and focus” of using a wilfully old-fashioned cellar, situated on one of the Weinviertel’s numerous “Kellergasse”  (Cellar streets) which line the roads by vineyards. These often minute wineries were positioned to be as close as possible to their owner’s vineyards, however the modern era has seen their decline, with most now being used as bijou holiday homes rather than their original purpose.

Norbert’s winemaker Markus is philosophical about the challenges. We talk about the white wines, and taste some beautiful barrel samples of Riesling, Pinot Blanc and Chardonnay – fresh, taut and mineral. I wonder whether Markus likes to let any of the whites go through their secondary (malolactic) fermentation. He replies that it is not entirely his choice. In an old and relatively cramped cellar, if the appropriate yeasts and bacteria are swilling around in the air, some vats will go through malolactic – and Marcus seems quite comfortable with this laissez-faire thread to an otherwise very controlled approach.

We’re also treated to a fascinating mini-masterclass on yeast selection. Markus shows three barrel samples of St. Laurent, Austria’s rather Pinot Noir-esque velvety red grape, each identical but for a different selected yeast – the same grapes, from the vineyard plot, picked at the same time. The results are extraordinary, with not just the flavour profile but also the structure of the wine being markedly different in each case – an Epernay yeast producing a soft, fruity wine, whilst the other yeasts accentuate the tannins and completely change the fruit character. Regular readers of this blog know I am not particularly comfortable with such an interventionist approach, but at the same time it is pretty fascinating to grasp the significance of yeast to the end-product.

The one topic we don’t cover chez Bauer is Grüner Veltliner – By far the Weinviertel’s most planted grape, and arguably Austria’s most famous vinous export. Markus reckons, quite rightly, that by the end of the day we’ll have tasted enough “Gru Vees” to last a lifetime.

Producers like Norbert Bauer have worked hard to reposition the Weinviertel as a quality region, in contrast to its old image as the home of cheap, everyday wines. Bauer and four other wineries from the Western Weinviertel have combined forces to promote themselves as the “Weinviertel Ambassadors”, a smart move given that none are individually large enough to comfortably deal direct with supermarkets or other large retailers.

Back to “Gru Vee”…. It’s said that Grüner from the Weinviertel can be the most peppery and intense from anywhere in Austria. I was also hoping I might find good examples of wines displaying the variety’s attractive vegetal character. 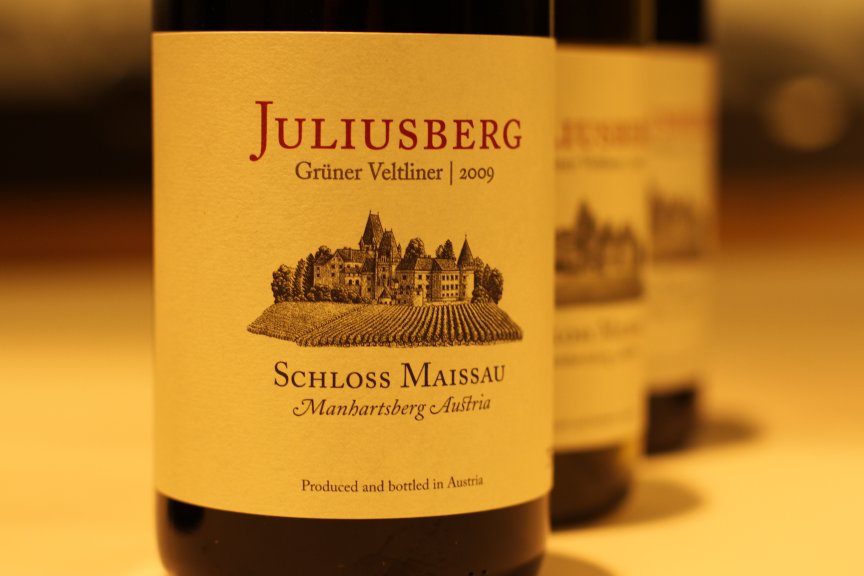 Schloss Maissau is somewhat unique in Austria for having planted its entire 12 hectares with only Grüner Veltliner. Of particular note is the Juliusberg plot, in the foothills of the Bohemian Massif. The wines display intense wet stone and mineral characteristics, significant vintage variation (I mention this as a positive, by the way) and impressive length. The 2007 and 2009 are my favourites for drinking now.

Schloss Maissau’s winemaker Ewald Gruber is also masterminding production for Stift Altenburg, an extremely impressive medieval abbey which has owned vineyards since 1755. I talked with the abbey’s priest, Father Michael, and loved his philosophy that a good bottle of wine could subtly communicate something positive about God, and the monk’s lives. And the Stift Altenburg Hohenstein-Limberg Grüner Veltliners certainly rate as “good” – being fairly full bodied, with attractive honeyed characters and the typical green pepper (capsicum) note that is so talked about, yet so seldom achieved. 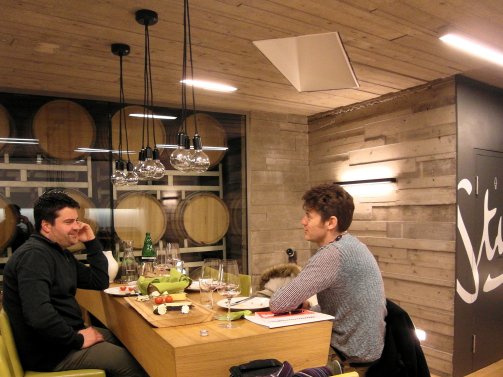 Austrian wine consumers have an obsession with wanting the youngest possible vintage of a white wine, something which I suspect drives Herbert Studeny mad, as his wines show their best with considerable ageing. He presents a quiet and almost shy exterior as we sit in his impressively chic and modern tasting room, in Obermarkersdorf. Studeny’s Grüners are perhaps the most complex in the Weinviertel Ambassadors group – specifically those from the Atschbach vineyard, with a microclimate created by its position at the foot of the Manhartsberg. The 2011 is already showing fascinating hints of angelica, herbs and benedictine liqueur, but it’s when I taste the 2006 that I really begin to appreciate that this is a vin de garde – still impressively fresh, yet with more gravitas, weight and the appealing vegetal quality that I love in this grape. Even the calm Studeny becomes noticeably animate as we enthuse over this more mature bottle.

The obsession with “DYA” (Drink youngest available) doesn’t extend quite so much to red wines, and Anton Schöfmann’s varietal wines and cuvees are also best enjoyed with a few years on the clock. Schöfmann is not afraid to produce seriously structured reds (Something which is relatively rare, as the Austrian market tends to prefer feather-light tannins and a fruit focus), with wines like the Hutberg or Zweigelt Reserves being prime examples. Deft handling of oak (some of it local, most of it old) creates balanced but hefty wines which still retain fruit and good acidity. 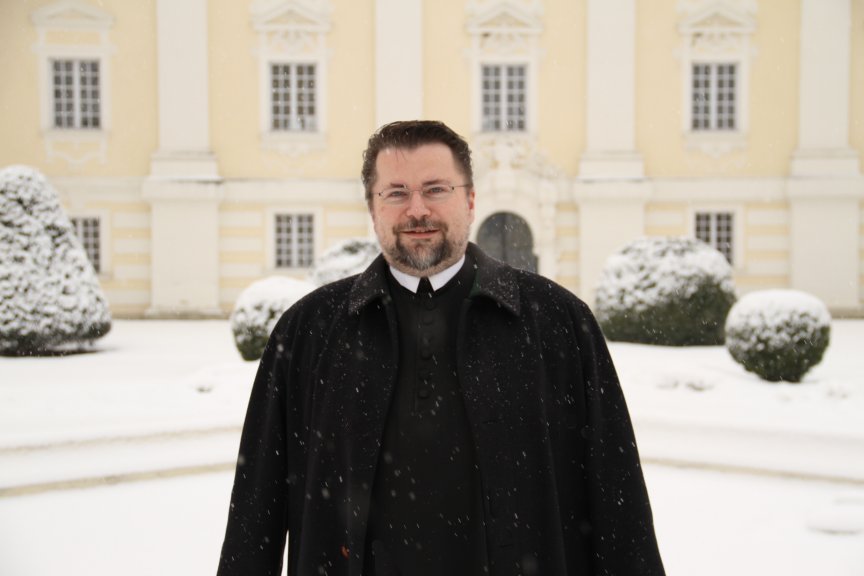 As I looked back over my tasting notes from the five “ambassadors”, something struck me: Only a small proportion of the wines were using either the Weinviertel Classic or Reserve DACs. Many of the best, most interesting or “premium” wines were unclassified. The Weinviertel DAC (which only covers Grüner Veltliner) attempts to define stylistic characteristics, and when I queried Herbert Studeny about why a wine like the Atschbach was not classified, he replied that he felt it did not fit the prescribed profile. It baffles me, if classifications that are supposed to celebrate regional characteristics over identikit wines are this restrictive.

Ultimately whether a Weinviertel Grüner Veltliner boasts the DAC “badge of honour” seems far less important than the skill, care and ambitions of the producer. And whilst I would have liked to see a little more pushing of boundaries, I was left in no doubt that the Weinviertel Ambassadors possess generous amounts of all three.

—–
Many thanks to the Weinviertel Ambassadors for their time and Elisabeth Gstarz for organising the visits and tastings.

Felt a bit like a foreigner to a debate I didn’t know was going on.

When the uninformed like myself buy Austrian wines, which I do a lot of, I think Variety, Winemaker, Vintage, Location both general by region and specific plot—and of course Approach and Soil.

This makes it easy to drink and compare Gruners and Rieslings from Ott and Nikolaihof which I just did recently. A happy experiment BTW.

Most interesting in this post to me your talk about being able to taste the affects of different yeasts. This is chemistry not winemaking to me as you might imagine but I’m intrigued as honestly, I’ve never had the opportunity of having this made tastable to me.

Thanks for putting the time in to share this info.

Hi Arnold, Yes, the whole DAC thing has largely passed consumers by – and that’s one of its many problems. Some would say that 10 years isn’t enough to really penetrate the mind of the consumer. I’m not sure. Regarding yeasts, I tend to agree with you about the “chemistry not winemaking”, but then again, if one is going to champion wild yeasts etc then it is very important to understand what effect yeast has on a wine. It would of course have been even more fascinating to compare the cultured yeasts with a wild ferment. Also, to be fair, Norbert Bauer are making reasonably large quantities of wine (about 300,000 bottles a year if I recall correctly), and Markus told me that it would simply not be practical to try to manage that quantity of wines with wild yeasts. I’m looking forward to visiting Nikolaihof at some point in… Read more »

Hey Simon… Agree completely that understanding has it’s own value. I would really like to taste the yeasts and get calibrated. One minor rant that is important to me. I don’t define my likes or my tastes by what I don’t like. And I don’t have a problem with anyone making wine for any audience as they want to. It’s always been like that for what 6-700 years. Business is business. Our good fortune is that we can spend a lifetime enjoying and writing about that what intersts us as the depth of these different niches are really quite robust and a accessible. And the market they drive quite sizable and influential. I would so like to visit Nikolaihof. I discovered his wines at EWBC Vienna but we did not visit him. If you go I’m certain I can get an intro for you if you’d like from either the… Read more »