“The really big change was when I tasted the wine. It was something completely new, totally different and exciting. It made me crazy, just tasting it.”

This is how Stanko Radikon describes the life changing moment in 1995 which prompted him to switch the family’s entire wine production to what we now know and love as “orange wines”. Dissatisfied with the paucity of flavour and expression he was extracting from Ribolla Gialla (a thick skinned white grape variety indigenous to the region), Radikon conducted an experiment – he took half the harvest of Ribolla and wild fermented it with the skins for 7 days, just as his grandfather would have done.

The extended skin contact brought out an intensity of flavours and aromas that surprised even its creator. This rediscovered method would eventually help kickstart a new trend in wine, spreading to the wine geeks and sommeliers of New York, London and the world. 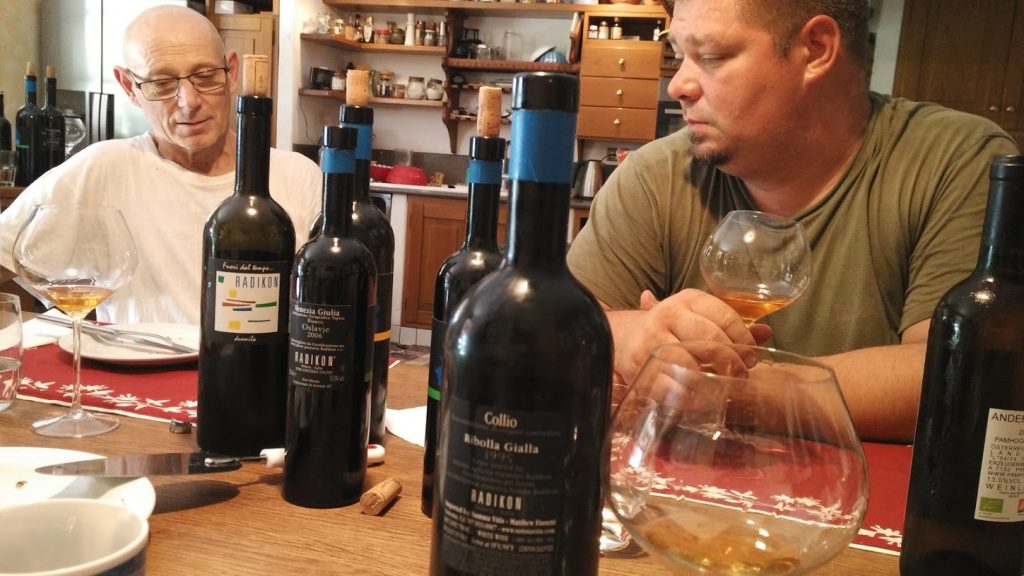 But before the “orange wine” concept became popular, before it even had a name, there would be hard times ahead, as Stanko reflected in 2016: “In the first years after we changed our style, we kept about half our customers, but after a few more years we lost more of them. But there are two moments when you can make a big change like this – when it’s going really, really well, or when it’s going really, really badly. And for us it had been going really really well”.

I asked Stanko’s wife Susanna if she thought he was crazy: “Yes, I did, I couldn’t understand why he wanted to change everything when it was working so well – but I trusted him. And I liked the wine – it was so different and exciting!”.

History in a bottle

Old and venerable bottles of wine are often filled with resonance, but even by those standards it is special to taste Radikon’s 1995 Ribolla Gialla – the prototype, together with colleague and neighbour Joško Gravner’s wines, for so much that would follow.

Fermentation took place in barriques – the large Slavonian oak botti and open top fermenters came later. There are much more noticeable signs of oak influence than you would expect in current Radikon vintages, such as the aromas of caramel and spice. This is a sprightly 21 year old however, with bright acidity and the sensation of fruit – plum skin and quince. There’s a nice note of dried sage and mint, which carries the wine through to a long and lively finish.

The texture is supple, with a gentle suggestion of tannins. Stanko and son Saša later settled on 3 months as the optimum period of skin contact, and here with only a week it’s as if the full power of Ribolla Gialla has yet to be unleashed. Not surprisingly, this wine has the feeling of an experiment – a new beginning, year zero, but not quite fully formed.

The 1995 Ribolla Gialla was bottled and labelled, using the previous year’s US labels. It was however never put on the market, and to date the few remaining bottles remain at the property.

The label carries the “Collio” DOC, however I suppose that the consorzio would have rejected it for the Collio appellation, had it been released for sale. Both the colour and the flavour profile would have been deemed “wrong” or atypical. To this day, Radikon, Gravner, and most of their colleagues bottle their wines under the lowlier “Venezia Giulia IGP” category. The Friuli Collio consorzio still doesn’t consider that these wines are representative of the region. Now that is truly crazy.

Chameleon Chardonnay: Save our Souls “Skin on Skin” 2015

[…] remarked that it was Ribolla Gialla that led him down the long skin contact path, nothing else. The lightbulb moment came in 1995, when he decided to return to his grandfather’s […]