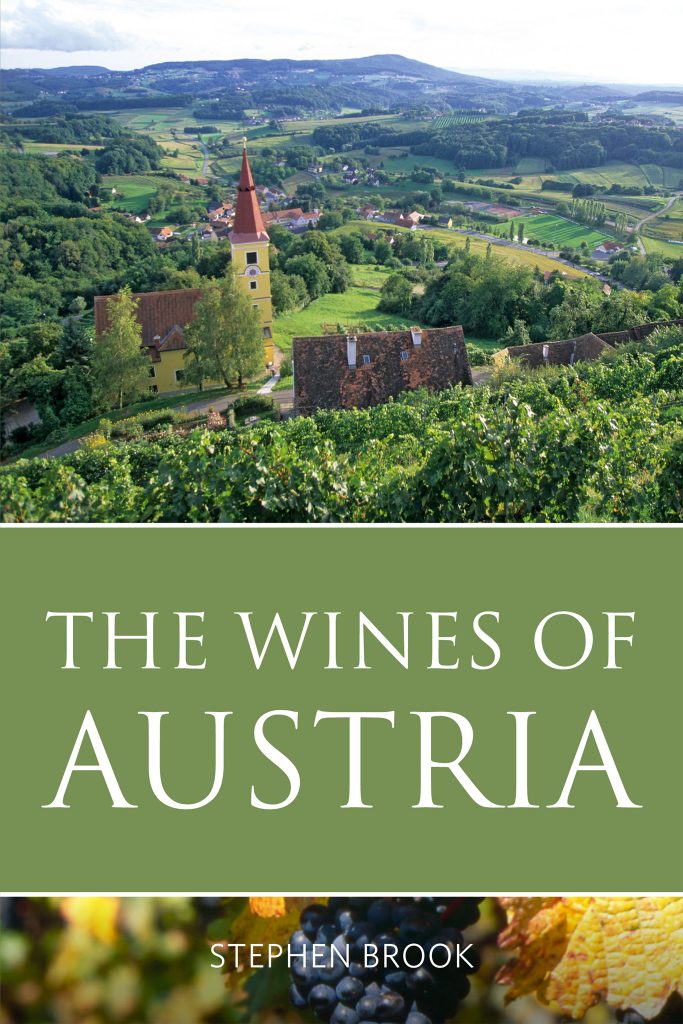 The decision to launch a new series of books about wine in 2016 is a brave one, but that’s just what publisher Infinite Ideas has done. The first nine titles in “The Classic Wine Library” are now available, including two written by series editor Richard Mayson, and the title under discussion here: Stephen Brook’s “The Wines of Austria”.

For longtime Austrophiles like myself, this book was eagerly anticipated. Living in Eisenstadt, the heart of Burgenland, I was aware of multiple visitations by Le Brook as he completed his research – for Brook is clearly passionate about Austria. In his introduction he notes that “This book is not the outcome of a few trips […] in recent years, but reflects visits spanning almost 40 years”. What a shame that his passion is so poorly communicated in this dry, dusty tome, which seems unable to figure out if it wants to be a non-fiction book or an academic reference work.

The issues are apparent even from the format. There are a mere 8 colour plates out of 294 pages plus scant black and white maps. This feels pretty stingy for a book with a £30 RRP, which is supposed to be orientated towards “wine lovers, tourists [and] armchair travellers” as well as wine trade professionals. The layout feels old-fashioned, the mediocre landscape shots poorly reproduced. Even the cover looks like it came straight out of a university library.

After an introduction, and rundown of Austria’s many grape varieties, 17 chapters cover the major wine regions, with a final section offering an exorbitantly detailed analysis of vintage conditions from the 1960s to 2015 (15 pages no less). Even MW students probably don’t need to know that flowering was difficult in 1995, or that the 1980 wines are “past their modest best”. It clearly demonstrates Brook’s peerless, encyclopedic knowledge, but at the expense of a catastrophic waste of paper.

Most of the book is dedicated to winery listings, presented in a mind-crushingly dull and indigestible format. There are neither photos of winemaking families, nor bottleshots or labels – which would bring these pages to life and make them more useful for visitors to the regions. The information is presented as a wall of text, where surely bullet pointed lists of important wines and vintages would aid enthusiasts.

The Wines of Austria positions itself as a reference work, yet it is not complete enough for that purpose. Many up and coming, smaller or cult wineries are absent – to name a few, Arndorfer, Diwald, Tauss, Werlitsch (both mentioned in passing in the introduction to Styria, but not granted an entry), Christian Tschida, Winzerschössl Kaiser, Michael Andert. Frustratingly, Brook neither explains nor justifies the choice of wineries that were included. Readers may well incorrectly assume that these are complete listings.

Perhaps Brook could have focused on favourite or significant estates from each region. This would have been more equitable than the magnanimous texts on preferred producers, contrasted with cursory and opinionated dismissal of those not to his taste. Gut Oggau and Andreas Tscheppe, two ground breaking estates in my opinion, come in for particularly short shrift.

There are tantalising glimpses of interest in the regional introductions. Brook’s considerable overview enables him to pinpoint many historical nuggets, such as the development of Heurigen and Buschenschänken (simple taverns where wineries sell their produce direct to the public) or the group of producers in Rust who formed a union to defend the Ausbruch sweet wine style.

Biodynamics, the farming system and philosophy developed by Austria’s own Rudolf Steiner is barely explained (except rather derisively in relation to some wineries who practice it). Maria Thun, another key Austrian 20th century figure who conceived the biodynamic calendar goes without a mention.

Heurigen and Buschenschänken are such an important part of Austria’s wine culture, and while this is acknowledged, some signposts to the exceptional examples would have been welcome. Continuing that theme, insights into Austria’s culture of food and wine consumption would add a huge amount of value. Austria’s best loved beverage, the Weißer Spritzer (white wine and sparkling water), isn’t even mentioned. This might have no bearing on the fine wine world, but most Austrians probably consume more white wine “g’spritzt” than they drink water.

The challenge with a book like this in the 21st century is that much of the information is available in better and more complete forms on and offline. Inevitably, reference works are out of date by the time they’re printed. The book’s value could be either in eye grabbing presentation, or the author’s unique angle and writing style. Here, both utterly fail to inspire.

I really wanted to like this book. Brook has the clout and the experience to deliver, and a definitive work to replace Philip Blom’s long out of print predecessor was much needed. Sadly, “The wines of Austria” is a missed opportunity, and a throwback to the pre-internet days when hard-copy curated catalogues (which is essentially what this is) were useful. The gaping hole for a modern “go to” text on this important wine nation is still unfilled.

The Wines of Austria is published by Infinite Ideas, in both hard copy and kindle editions.

My copy was provided for review.

Prinčič and the peronospera: A fable