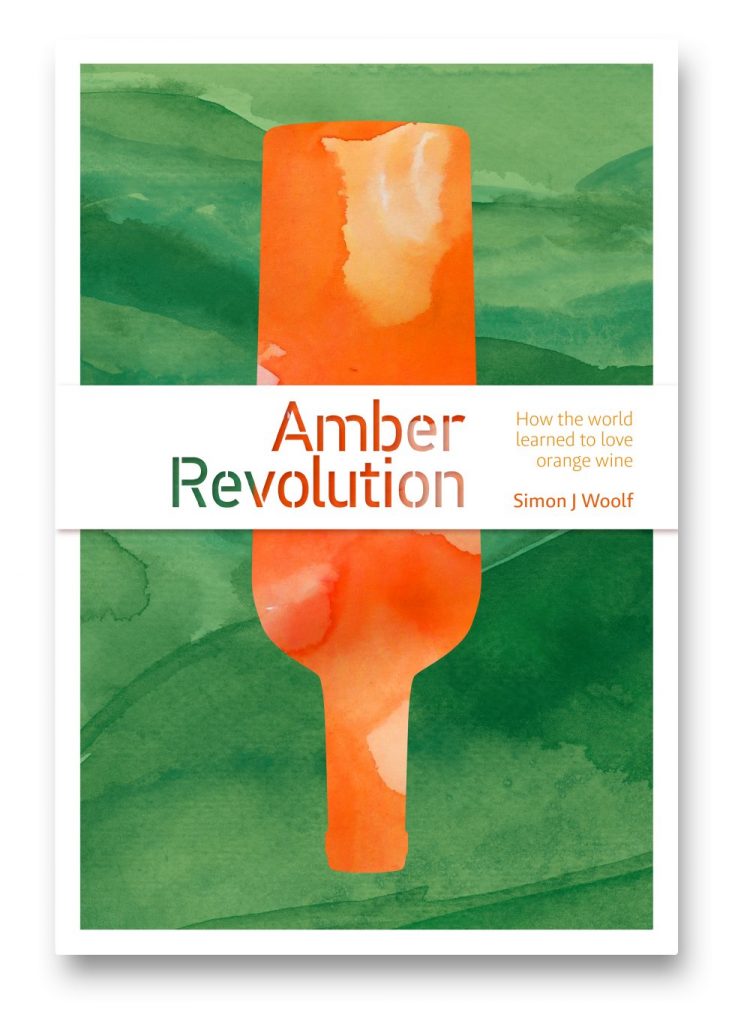 Click here to support the production of Amber Revolution on Kickstarter now!

I’ll never forget the first time I visited Friuli, in North-East Italy. Due to some truly inspired scheduling by the local consorzio, our group of wine writers and bloggers visited three iconic cellars in Friuli Carso on a beautiful autumn morning. All were outstanding properties with amazing wines, but the one that sticks in my memory most is Sandi Skerk.

Deep around in Sandi’s stone lair, dug painstakingly out of the dense Carso rock, we tasted his white wines and the Ograde blend, all made with long skin contact. These wines blew my mind with their profound hues – russet gold, autumnal amber, even shocking pink in the case of the Pinot Grigio. And the flavours – so intense, lively and quite unlike any other white wine I had ever tasted before.

This was my “orange wine” enlightenment. It wasn’t the very first time I’d ever tasted a white wine made with extended skin maceration. That honour must go to an Elisabetta Foradori that was served by Walter Speller, in a tasting of Italian natural wines given at WSET’s offices in London. Out of context, it neither convinced nor repelled me. I simply didn’t understand it.

But in Sandi’s cellar, it was a different matter. A lightbulb went on, glowing luminescent orange. It has barely flickered over the last six years. I’m utterly besotted, even obsessed with orange wine.

The problem? I came home from that trip full of excitement and did what I always do. I started searching hungrily for information – surely there must be books on the wonderful natural wines of Friuli? There must be plenty written about this orange wine tradition (even if many of the producers didn’t like that name).

I couldn’t believe that there was almost nothing. I found some great articles from Eric Asimov in the New York Times, and what is perhaps still the best reference online in this short series by Elaine “Hawk Wakawaka”. But that was about it. And books? None. I’m a bit of a slow thinker, which explains why it took me another two years to come up with the idea of writing one – and then a further four years to actually make it happen.

But now I have, and Amber Revolution is well on the way to being reality – it’s 50% written, 250% researched and due to roll off the printing presses somewhere around May/June 2018. It turned into the most enormous journey through winemaking history, following up the many tantalising clues and hints laid down in previous articles such as the above. Most interesting – and frustrating – was the realisation that winemaking as a craft has been handed down for generations almost entirely orally. There is next to nothing in most winemaking cultures that helps us understand what our predecessors were really doing in their cellars, or how they were drinking.

So what’s in this book? The largest part tells the extraordinary history of post-war Friuli Collio and Slovenian Brda (two brothers/sisters in wine cruelly separated by a political border), and of pre and post-USSR Georgia – the cradle of wine, and almost certainly the 8,000 year old birthplace of orange wine as we now know it.

This is a story that I believe is compelling, and as good as any novel. I hope it’ll be a book that people take to bed for a good read – not a dry reference work that sits on a library shelf. There are enough of those in this world, very useful though they are.

Then I’ll profile around 180 producers worldwide who specialise in this style. This won’t be a complete list of anyone who’s ever made an orange wine. It’s more to help people locate those winemakers who truly believe in orange wine. As Josko Gravner said to me last week, in his typically uncompromising way, “Maceration improves the quality, so why do people only use it for some of their wines?”.

Amber Revolution is a self-funded, self-published book. Publishers find this niche hard to understand, as I discovered earlier this year. They don’t yet know how many fans this style has worldwide. I have to convince them, and I need your support to do it. On 21st September I launched a Kickstarter campaign that will fund the production of the book. It would be nothing less than amazing if you can pitch in – pre-ordering a book costs only €25, if you’re quick and you grab one of the early bird offers. You can view all the treats on offer here.

Amber Revolution – the world’s first book to tell the full, forgotten story of orange wine from Simon Woolf on Vimeo.

[…] As Amber Revolution approches its second stretch goal on Kickstarter, what better way to celebrate than by reviewing another orange wine? This time we’re heading to Austria to revisit a producer already mentioned briefly on this site: The Rennersistas Chardonnay 2015. […]