Poland doesn’t get the respect that it deserves, either with food or wine. Ignorance too often clouds the landscape. I was recently on a train to Warsaw eavesdropping as four Brits struggled to come up with a single dish other than vodka.

And when it comes to Polish wine, it’s fair to say it does not rank highly on most lists. That’s if it appears at all. But I am here to say we should drink more Polish wine. It can be bloody good. In conversation with one of the sommeliers at Bez Gwiazdek (Warsaw), I learned that in 2005, Poland had five known winemakers. Today, there are over 120, so it’s a good time to start exploring.

The wines of Dom Bliskowice, based in eastern Poland (between Krakow and Warsaw, same latitude as Dresden), are a great place to start. The owners Lech Mill and Maciej Sondij are Warsaw architects, who also have a restaurant and a wine importing business focused on artisanal wine. So I was not surprised to find that they had made an orange wine.

The wine is from 8-year-old vines of Johanniter, a 1968 German hybrid with Riesling and another hybrid Freiburg 589-54 as parents. Fermentation was spontaneous with indigenous yeasts in temperature-controlled stainless steel vats. Two-week skin maceration. Six-month ageing on lees. Unfiltered. 12.4% ABV. 1300 bottles for 2016. 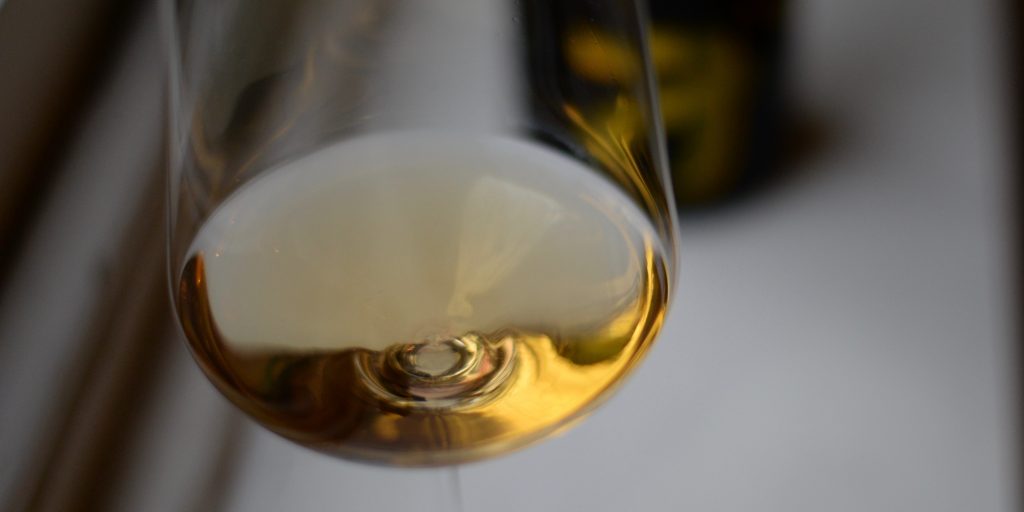 More aromatic than a Riesling. Starts off with a muscat-like sweet nose of ripe golden apples, but with a slatey backbone that keeps the overall impression an elegant one. The slatey character, along with the leesy, brown sugar sweetness, reminded me of colder climate white wine from Savoie. No oak.

Addictive sweet-and-sour combo. The tongue-tickling 10g/l acidity is countered equally by 10g/l residual sugar. The initial concentrated honey and apple is reminiscent of Riesling. However, apricot notes come in mid-palate and adds more structure. The finish is light with lime entering after the heavier fruits. Surprisingly, no tannins despite the longer skin contact. I recommend this on the colder side, since the wine can become slightly unbalanced toward the sweet when the temperature rises.

Poland now also has a burgeoning craft beer scene. To sample some, go to Same Krafty in Warsaw’s Old Town.

My Top 3 restaurants during my 4-day stay in Warsaw were Bez Gwiandzek, Rozbrat 20, and Concept 13.

In Europe, Winoblisko sells all of Dom Bliskowice’s wines, but I have not confirmed whether they deliver outside of Poland.

Refinement and classicism in Mlečnik Ana

Hails from Japan. Raised on German Riesling. Loves languages. Trained anthropologist. Lives in London. Data cruncher for Casio when not tasting and writing.

I want to find out how I can get this wine in the USA? I had tried it when I visited Poland and every liquor store I went into did not carry it. Some one in London had tried it….so I know it can be sent to other countries.

I suggest sending them a message from their facebook page: https://www.facebook.com/dombliskowice/
I’m not aware if the wines have made it across the pond or not.