It started with a seemingly innocent question from Oscar Quevedo: “Simon, do you know how to make an orange wine?”. Oscar isn’t stupid of course, he knew damn well I’d have something to say on the subject.

We were sat in the tasting room at Quevedo, a port and still wine producer in the Cima Corgo sub-region of the Douro valley, on a typically roasting hot July day. The question came completely out of the blue. “Well, theoretically yes. I’ve never made one, but I’ve visited and talked to maybe 50 producers who have”. 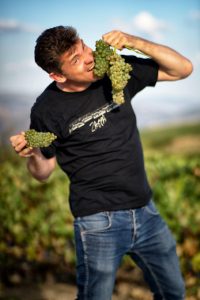 Fast-forward one hour, and I’d blurted out just about everything I could think of, mostly recycled pearls of wisdom from luminaries such as the Radikon or Gravner families. Oscar revealed his intention to try making an orange wine, as this year’s side-project to try something new at the winery. I offered my questionable consultancy services to come and help.

So, two months later I was back in S. João da Pesqueira, with approximately 10 days to collaborate with Quevedo’s winemaking team to make their first ever skin-contact white wine – perhaps even the Douro’s first. The aim – 1,000 bottles. No marketing plan, first see how the wine turns out.

The first order of business was a tasting of five sample orange wines, for Oscar, his sister Claudia (winemaker for the ports) and Quevedo’s main winemaker for still wines, Teresa Batista. None had any appreciable experience of the skin contact style beforehand. I was nervous – what if they hated the style, even now we’d agreed to try making one. 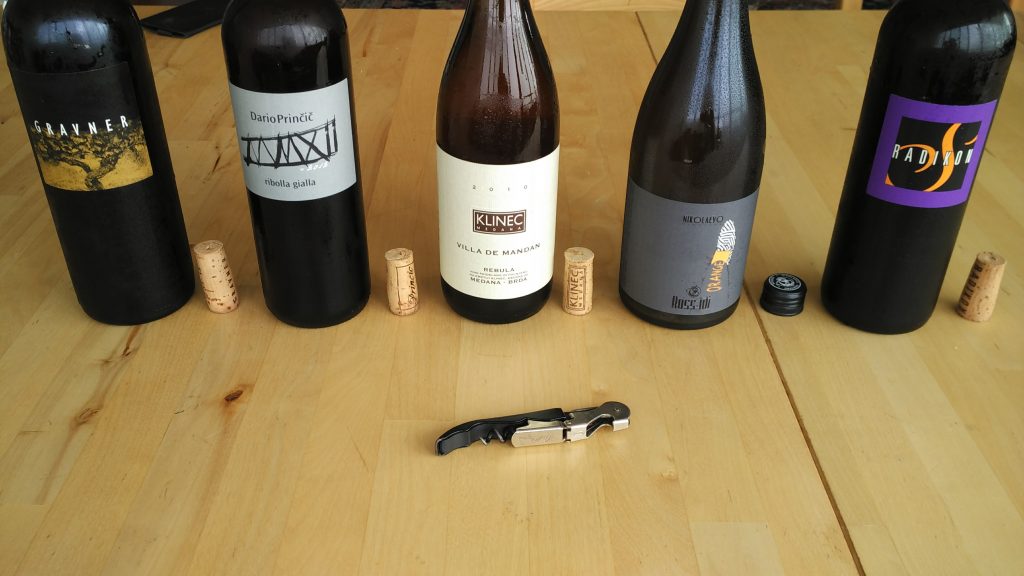 I needn’t have worried. Stellar wines from Radikon, Rossidi, Klinec, Princic and Gravner were much enjoyed and discussed, even if surprise was expressed at their sometimes cloudy appearances! I’d deliberately shown a range of skin contact times – from 7 days to six months. We decided that 7-14 days would be optimum for our wine, with the proviso that inclusion of stems might mean we’d need to back off the skin contact a bit. It all sounded so easy at this point. 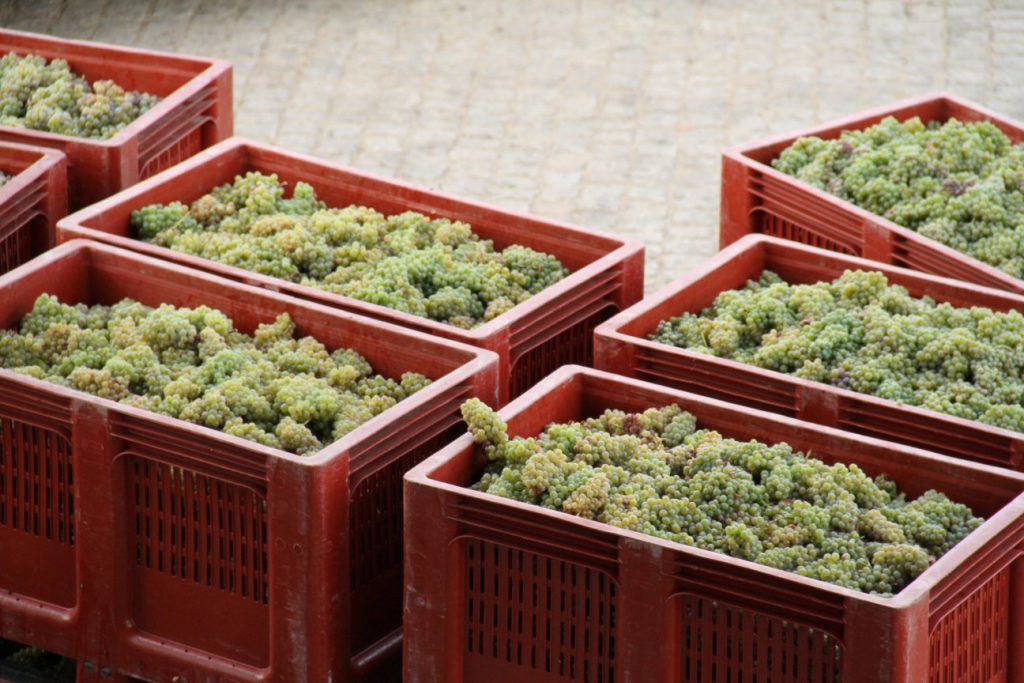 Making wine is a very, very different business to writing about it. Journalists, writers and bloggers such as myself may think we know a thing or two about production. We make intelligent-sounding comments about malolactic fermentation or the use of battonage to impress winemakers that we know what we’re talking about. But do we?

No, we don’t. As I discovered, making wine involves a whole series of decisions, logistics and other factors that never enter into the head of most outsiders – not even, I suspect, seasoned wine critics. 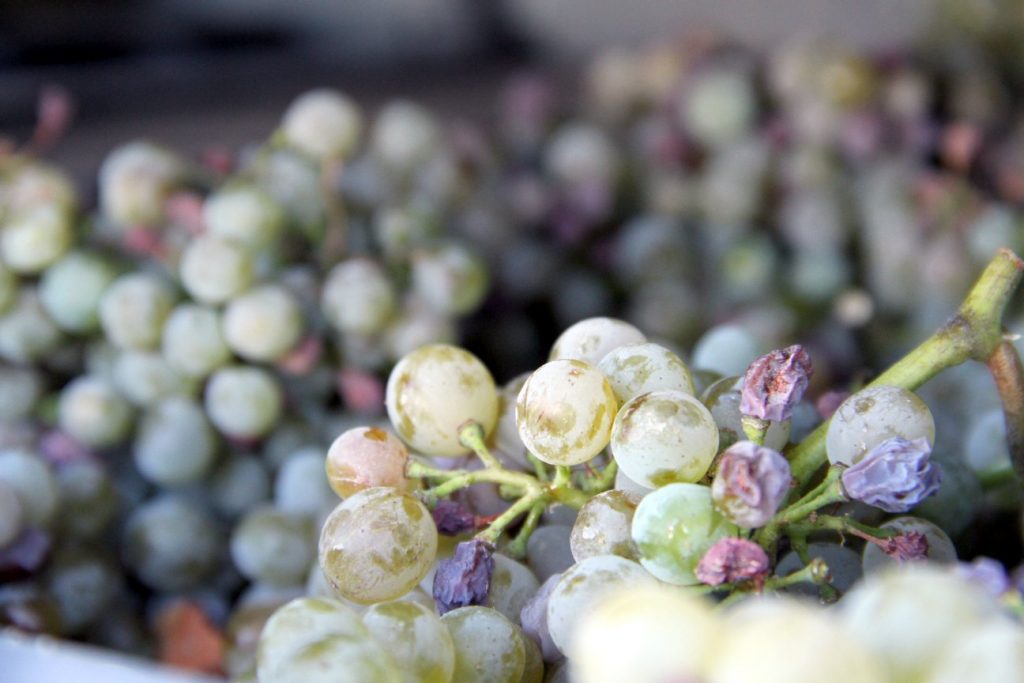 The first challenge was to decide what blend of grapes to use. We wanted our Douro “Orange” to have something to say about the region, so as with most traditional Douro wines it would be a blend of indigenous varieties. After much deliberation, we decided that the aromatics of Rabigato might pair well with Viosinho (good acidity). Searching for a thick-skinned variety, we settled on Síria (AKA Codega, AKA Roupeiro AKA many other things). 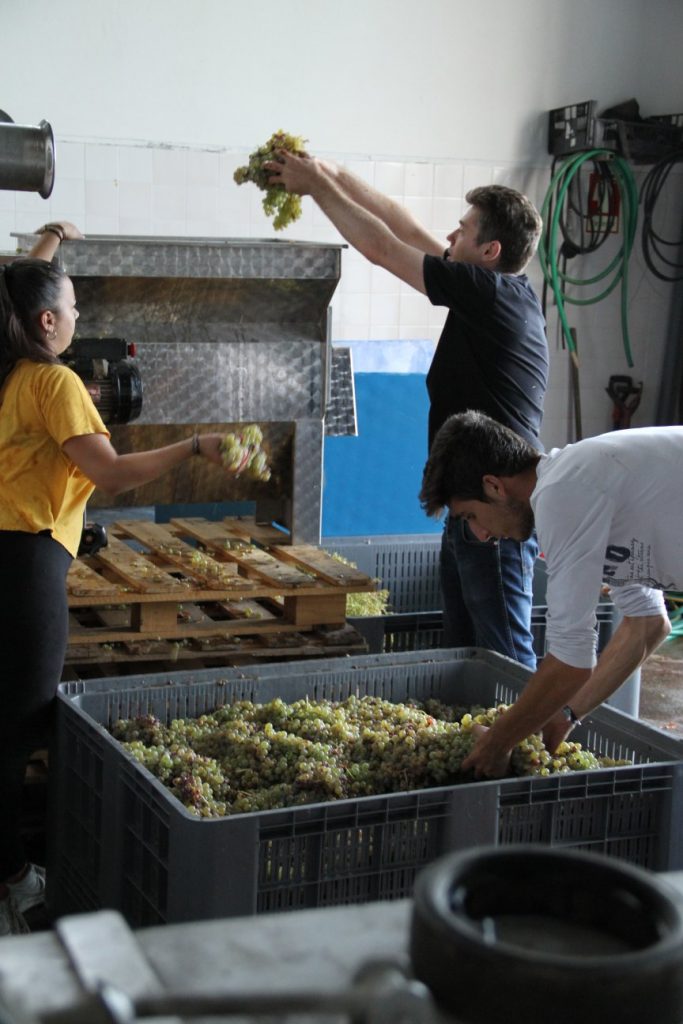 Then came the first issue – Quevedo buys in most of its white grapes, and the Rabigato didn’t show up when expected. We had Síria from two different growers, harvested on the same day but very different (one with good acids and the other a bit flat), plenty of Viosinho (borderline ripe but excellent acidity), but no Rabigato. Oscar had the solution – some Gouveio had also just been harvested, so our blend quickly mutated into 50% Síria, 25% Viosinho and 25% Gouveio.

Our next decision was whether to destem. A quick taste of the Síria stems revealed that we definitely should – they were bitter and unripe, although the grapes tasted good. A small destemmer was located, but there was no way to automate the loading. Quevedo’s continuous screwpress was not only far too huge for the job, but also too rough – we wanted to keep as many grapes whole as we could. (In the end we also included about 10% of the Gouveio stems as they tasted great). 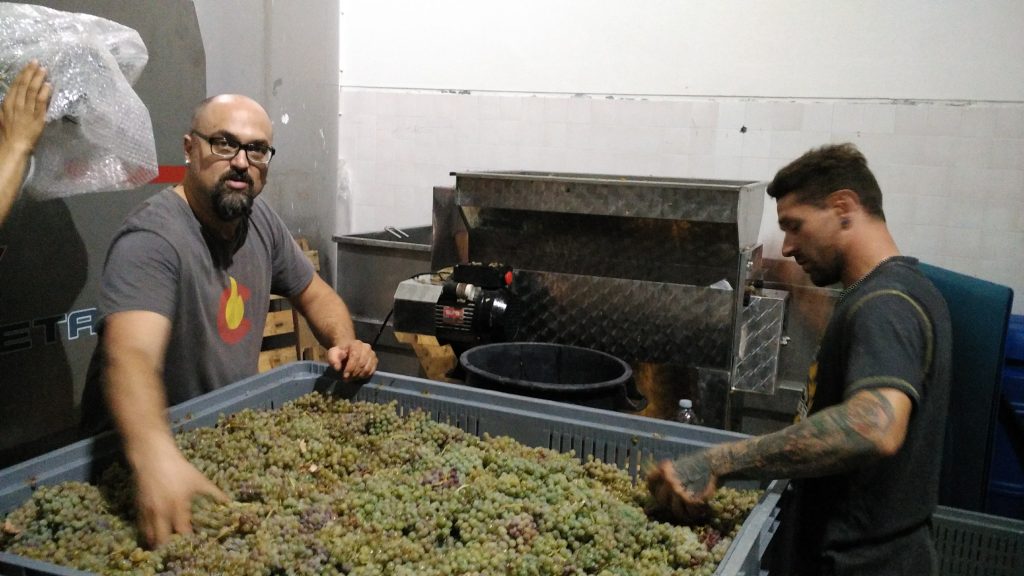 30 minutes later, with a small jerry-rigged destemmer perched atop some wooden pallets, we were off – hand loading eight cassettes of grapes into the hopper. A tedious and time-consuming task. Thank goodness for Mario and his colleague (assistants at the winery), a string of students, Teresa and Ryan Opaz, who all pitched in at various points during this five hour slog. I became rather obsessive compulsive and started to do some triage as I threw bunches in, picking out raisined grapes, leaves and stalks that had found their way in. Opinion is divided as to how much difference this makes to the final wine – of course it’s de rigeur at fancy Bordeaux estates to have lines of employees carefully picking over each grape, but there is some suggestion that this is 90% marketing and 10% necessity. 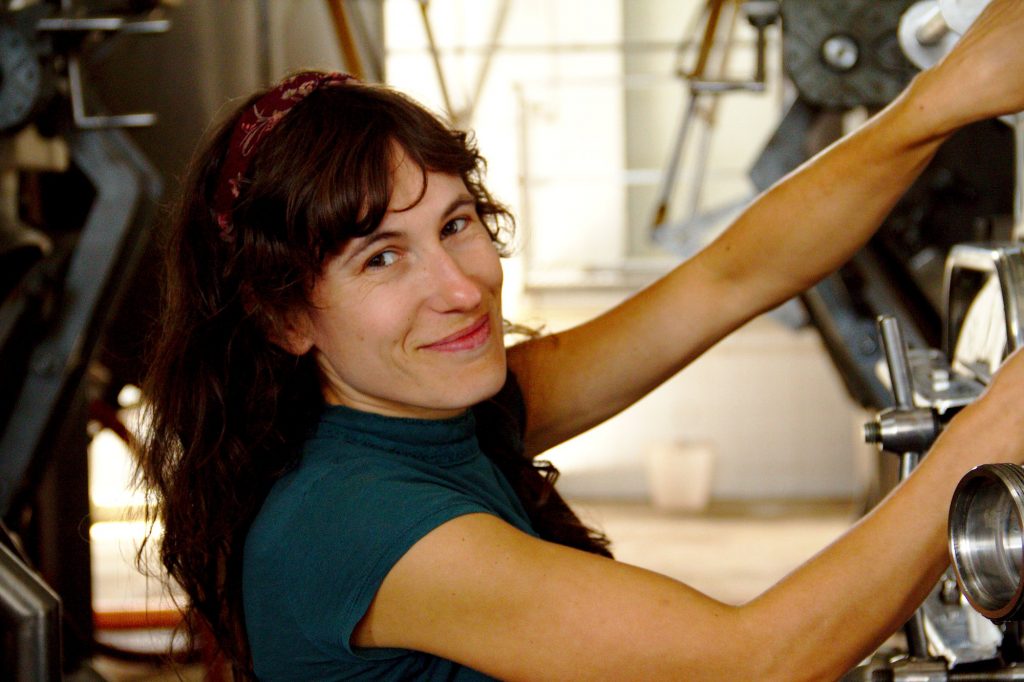 Here’s when one of the first interesting discussions happened. Quevedo’s winemaker Teresa wanted to add some SO2 to the must at this point. I wasn’t too happy about it. Her line of reasoning was that we had the grapes in open vats (they were very open – see picture below!), and they’d be at risk of oxidation until fermentation started. She persuaded me by pointing out that all of the SO2 would be consumed by the fermentation. We added a small dose to each tank – 500ml @ 6% solution per 750Kg grapes). Later, I was very glad we’d done this. 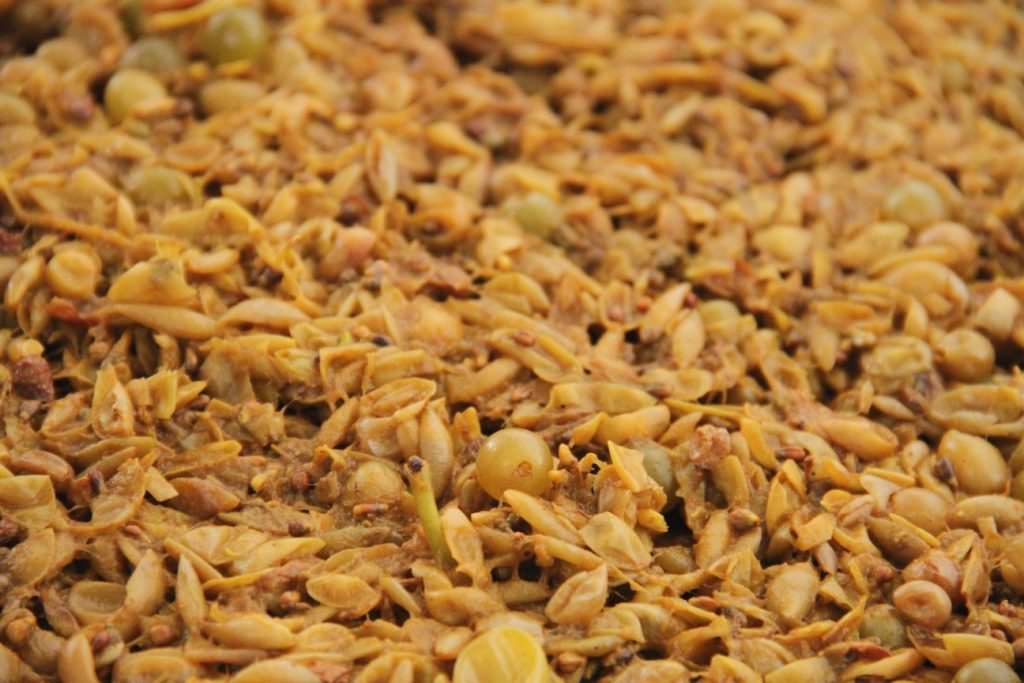 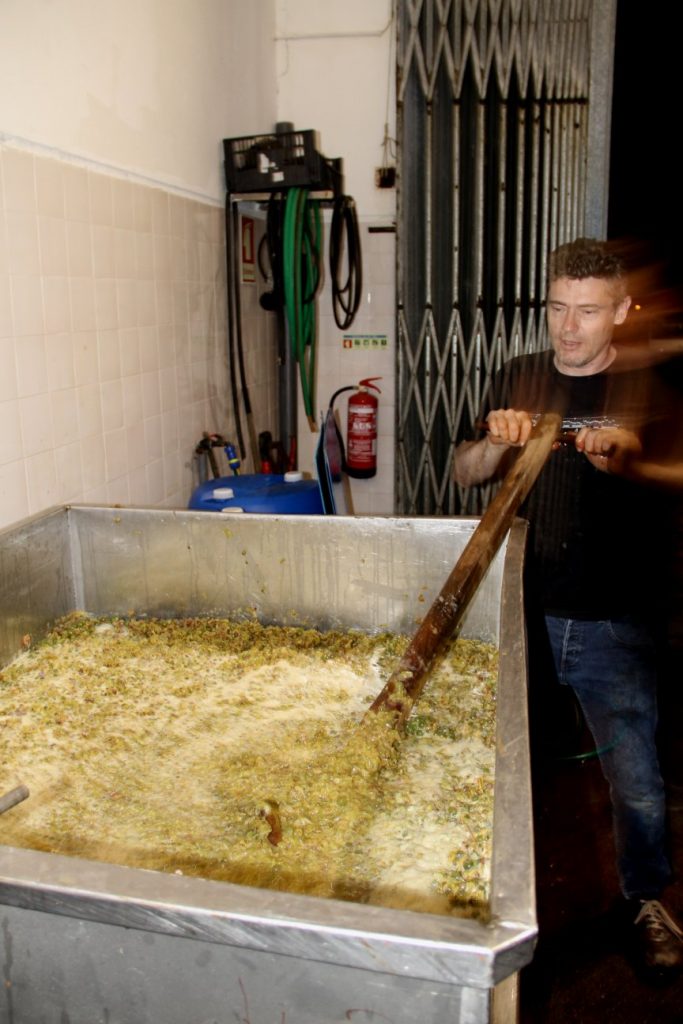 Finally by around 10pm, 1880Kg of grapes were settled in two 1,000 litre open steel vats, looking for all the world like some kind of weird olive porridge. Oscar arrived right on time with Pizza. I finished with a late night ceremonial punchdown (very important for skin contact wines), using a wonderful wooden implement that Teresa discovered somewhere deep in the bowels of the winery. I’m fairly sure it had been a museum piece for decades.

In part 2 (coming soon!), waiting for fermentation, and how we made this a uniquely Douro orange.

AWESOME! If anyone can do it, Oscar can.

To be fair although it was his idea, it’s been very much a team effort!

Great article. Fascinating stuff. Looking forward to the next bit.

Thanks – the story isn’t over yet but part 2 will be coming shortly! Part 3 is unfolding over the next few months . . .

I’d be interested to know how you decided on 7-14 days of skin contact? Was this based on the variety and the quality of the fruit you had available, or were you pursuing a specific flavour profile?

It was partly guess work really. We felt as we didn’t know what these grapes were going to do, when subjected to skin contact, we shouldn’t push it too far.

7 days seemed like a good place to start, but as I’ll explain in Part 2, it actually became 14 days almost by accident!

Thanks for posting this. Looking forward to parts 2 and 3! Going through a similar experience with a Greek winemaker, about to make his first (monovarietal) skin contact. The grape has a deeper orange pigmentation, so expecting to lead to a nice color.

Any update on this story? Very interested to see parts two and three.

[…] The award’s most popular category Best Editorial / Opinion wine writing, accounted for 40% of the articles that made it into the semifinals and proved to be one of the most interesting and challenging categories for assessors and judges. First place was awarded to Jane Anson for her discussion on ‘Why a decline in soil health should worry all wine lovers‘, an account of how essential soil health is to wine quality. Second place went to Jonathan Lipsmeyer’s article on wine and gender ‘Chambolle = Feminine. But Why?‘ and third place was assigned to Simon Woolf for his account of ‘Making Orange wine in the Douro‘. […]

[…] The award’s most popular category Best Editorial / Opinion wine writing accounted for 40% of the articles that made it into the semifinals and proved to be one of the most interesting and challenging categories for assessors and judges. First place was awarded to Jane Anson for her discussion on ‘Why a decline in soil health should worry all wine lovers‘, an account of how essential soil health is to wine quality. Second place went to Jonathan Lipsmeyer’s article on wine and gender ‘Chambolle = Feminine. But Why?‘ and third place was assigned to Simon Woolf for his account of ‘Making Orange wine in the Douro‘. […]