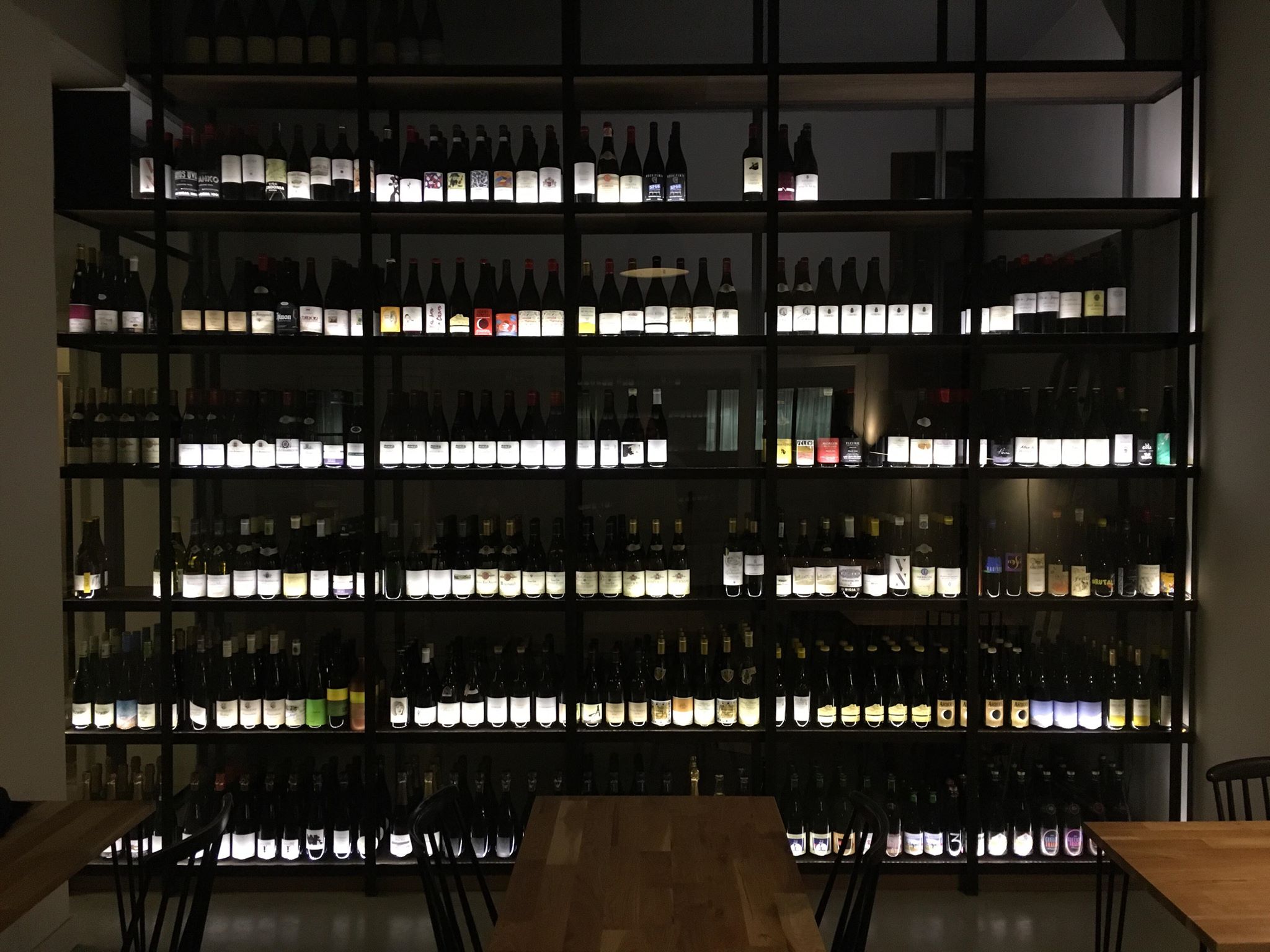 The first mystery to clear up about Ruth Lewandowski is that she’s a man.

Or rather, “Ruth” is the name of the winery. The wines are made by Evan Lewandowski, who chose his favourite book from the bible to name the project. Ruth has a lot to do with the cycles of life and death, something very pertinent to farming and viticulture.

The second mystery is where this wine actually comes from. For the course of a whole evening, I thought I was drinking my first ever (orange) wine from Utah. Well, almost. The Cortese grapes for Chilion are grown in Mendocino county, California, but after harvesting and the start of fermentation, they’re then trucked in large egg shaped tanks to Evan’s small winery in Salt Lake City, where they’ll stay for the rest of their upbringing.

Lewandowski fell in love with Utah while at University, and decided to return after a stint working in Alsace, France. Listening to him talk, Evan has a geeky enthusiasm (perhaps it’s those glasses) mixed with a deep, deep passion for natural winemaking. 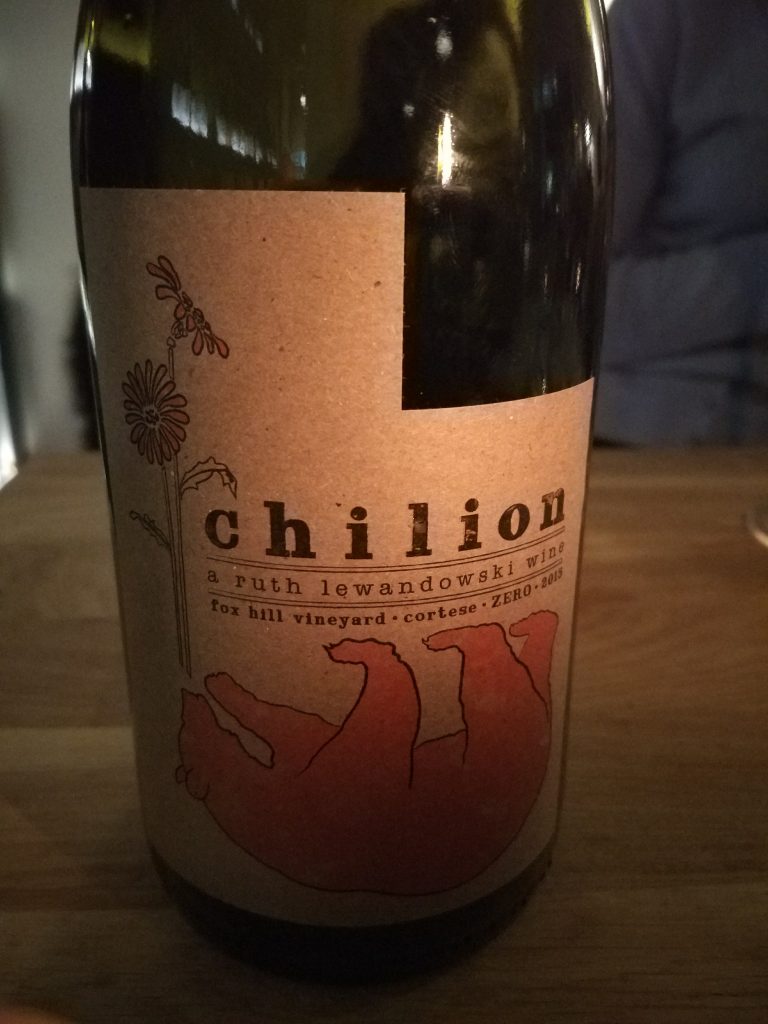 His Chilion 2015 is a real stunner. After popping the cork it was a bit shy and reduced, but after only minutes in the glass (and a decanter that was pressed swiftly into service) it started to reveal generous ripe fruit. As Lewandowski would be the first to say though, this is a wine that’s far more about texture and mineral notes than fruit. Cortese’s creaminess comes across loud and clear, but the greatest joy is the firm, grippy structure. This isn’t a wine for wimps!

This 2015 remained with its skins for a whole six months before being pressed. It is unfiltered, unprocessed in any way in fact. No sulphites were added, and none appear to be needed – it’s solid as a rock, and beautifully clean, focused stuff.

I discovered this beauty in one of Amsterdam’s newest and most fun locations for wine – 48 50 is the brainchild of sommelier Daniel Schein and chef Rikard Andersson (Both of Scandinavian Embassy fame). They’ve put together a relaxed, minimalist space with a treasure trove of a winelist and all day opening. Whether you want to drink natural orange wine from Utah, or a top Burgundy, everything is catered for. Their enthusiasm and dedication to good service is notable, and prices are very reasonable for what’s on offer. Sad to say, I got the last bottle of Chilion. (Don’t look for it – it’s not there anymore).

Back to Evan. After eight years making wine in Utah, he’s now finally planted his first vineyards in the state, a terroir he steadfastly believes could yield great results. So future developments are going to be very interesting – and the story of Ruth Lewandowski’s provenance might get a little simpler.

The real story behind Georgian wine

Yup a favorite of mine.

Nice. Yep, I’ve been working hard to make sure I round up as many good US producers as possible for the book! Delighted to have discovered this guy.

Who is your resource for this list of US natural winemakers who are experimenting with macerated whites?

Various really. A combination of my own random research plus suggestions from colleagues including yourself, Elaine Chukan Brown and Alice Feiring. And also seeing what’s being imported to Europe. Right now the US list numbers about 10 I think (ie: people doing something serious with skin contact)

I just got lucky with this – a bottle showed up at the right time in the right place. The perfect kind of research!

stumbling on things is the best.

best of luck with this and remove the word serious i think as the very unique characteristics of new world natural winemakers are the playfulness and experimentation.

natural is an approach, skin maceration simply a tool.

Point taken, but by “serious” I just mean “significant”. I don’t think that’s mutually exclusive to playfulness and experimentation.

Truth is that the wine itself bridges the gap and natural wine from all over even from the most innovative/counter establishment thinking like Chad Stock sitting easily next to Ducroux or Domaine de la Tournelle.

It’s the cultures of wine writing on either side where the frictions lie.

Though actually i get most of my info from shop newsletters and with some exceptions, read less wine writing and blogs lately. Just not being drawn in. Sad in a way. May be forced to pick up my pen again as at least I can speak for myself.

Looking forward to your book.

btw–picked up a bottle of this on the way home last evening based on our discussion. Does damn well on the scale of interesting to satisfying and delicious.

Nice. I’m deeply jealous you have it so freely on tap!

For N. American, French, Italy, Spain, Portugal natural wine, there is simply no better place to live and no shop better than Chambers Street Wines. Selection, price, expertise is kinda unmatched. Their buyers are in my opinion the most knowledgeable people anywhere, far moreso that journalists that I can discover as they are constantly in the field curating and buying. The issue is that they, and New York in general is very poor in wine from Eastern Europe. That is a problem and will be in Europe later this Spring to find somewhere closer to taste. btw–Drank a Pinot Noir Pet Nat from a young women winemaker from the Willamette named Jess Miller with her at a tasting last night. 1st generation producer with astounding talent. Part of the newest generation of ‘farmers’ who are kinda breaking all the rules. How and why they can end up in our shelves… Read more »

I didn’t know Cortese was
grown in California.
Influenced by some italian orange?

Nor did I! There’s some information on the Ruth Lewandowski site – basically it’s from a vineyard full of Italian varieties that was planted by a gentleman named Lowell Stone. Lewandowski also makes two wines with Arneis (from the same source).