Despatches from Porto: Simplesmente Vinho but is it organic? 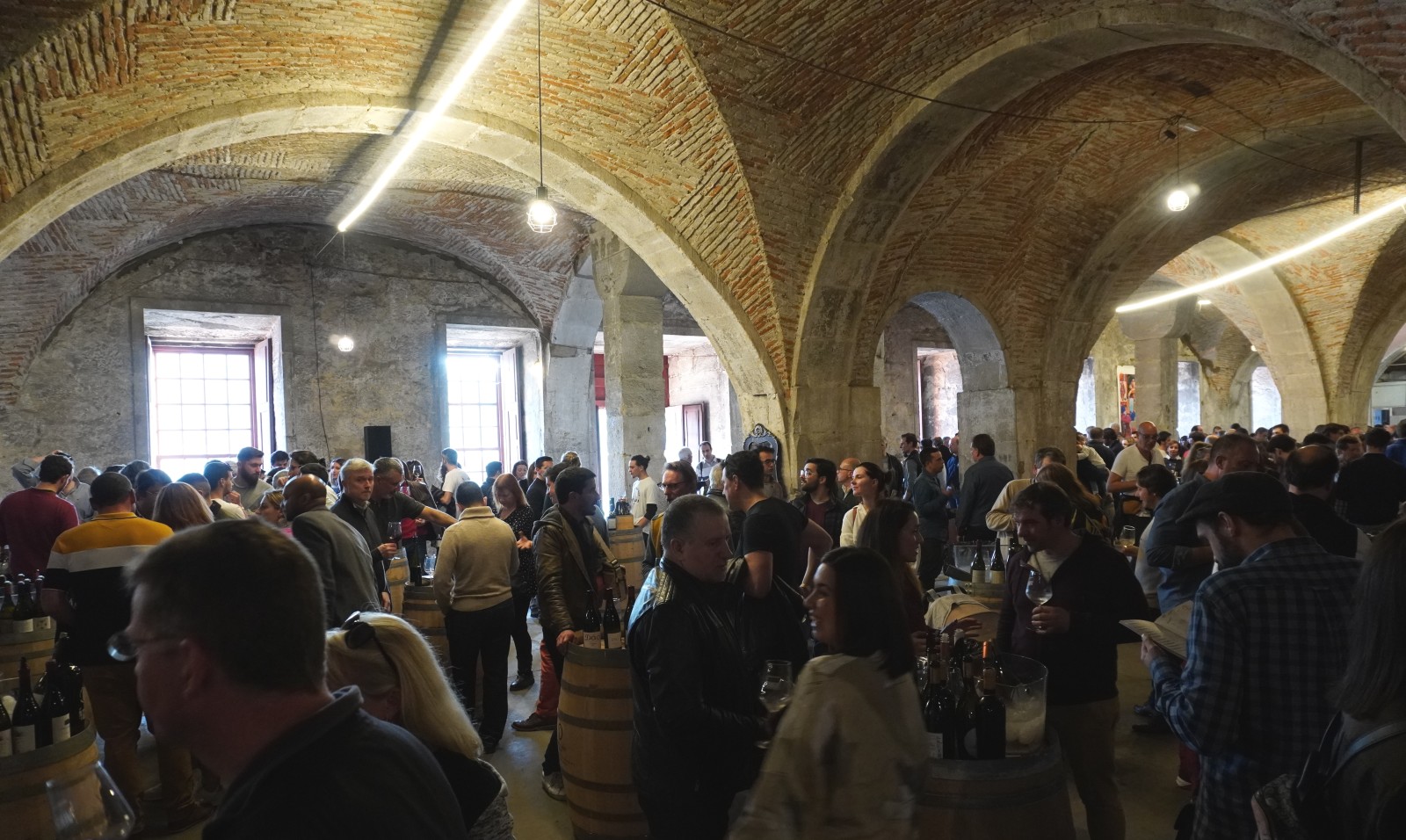 It’s now eight years since João Roseira & family first held Simplesmente Vinho, an ‘off event’ designed as an alternative to the much larger and more corporate Essencia do Vinho wine fair – both in Porto. In 2013 there were just 19 winemakers – all Portuguese. Last week, 99 Portuguese and Spanish artisan winemakers, one French/Portuguese plus one special guest (Joe Frick) from the US poured their wines in the buzzing, bright and gritty surroundings of Cais Novo (an old warehouse right by the river).

Simplesmente is now such a major draw that Essencia do Vinho itself has responded with more seminars and focus given to alternative or natural wines. Imitation is definitely the sincerest source of flattery.

If there’s one topic that has become the elephant in the room, it’s the discussions about organic (or not). Simplesmente Vinho doesn’t have a set-in-stone policy when it comes to the type of winemaking or viticulture – as Roseira puts it (paraphrasing Filipa Pato), he looks for “wines without make-up”, but that covers a broad church. This makes tasting at Simplesmente an occasionally baffling experience. You can be talking to a biodynamic mystic one second, tasting unfiltered unsulphured funk, while the neighbour at the next stand uses selected yeasts and insists that it’s impossible to farm organically in their part of Portugal.

Why does organic matter?

This is a strongly held personal view, but any serious artisan wine grower/producer who cares about the long term health of their vines and that of their employees (or family members) and customers should not be working with synthetic herbicides, pesticides or fungicides in the 21st century. Furthermore, any discussion about “natural” or “minimal intervention” winemaking (phrases much used in the vigneron’s biographies at Simplesmente) has to begin with responsible and sustainable farming practices that do not involve the use of synthetics. Additionally, there’s ample proof from regions such as Burgundy, Bordeaux and beyond that the most ethereal and elusive nuances in wine tend to unveil themselves when there is a fanatical dedication to vineyard health, based around organics or biodynamics. Growers such as Pontet-Canet, Romanée-Conti, Anne Leflaive, Radikon, Gravner or Rivetto (Demeter certified since the 2019 vintage) have shown the way here.

Simplesmente Vinho is the closest that Porto has to a natural wine fair right now – and it’s home to an increasingly large ‘family’ of minimal intervention winemakers, who show their wines every year. They include Aphros and Quinta da Palmarinha in Vinho Verde (both biodynamic certified, and in Portugal’s wettest wine region to boot), Folias de Baco in Douro, Casa de Mouraz, Filipa Pato, João Tavares de Pina and Antonio Madeira in Dão, Vale da Capucha and Humus in Lisboa. Added to that are a clutch of estates that are either 100% committed to organics or already 100% organic certified – Vadio, Vinhos Cortém and Dirk Niepoort’s special projects amongst them.

But then there is the huge grey area – there are many other producers whose wines I enjoy, but who hover somewhere along the line between “sort of organic with caveats” and “definitely not organic and insist it’s impossible”.

How is it that producers in the same regions, exhibiting their wines at the same fair under the same pseudo-artisanal/natural/low intervention banner have such differing opinions and outcomes? There are multiple and complex answers – some specific to Portugal or regions within it, others not.

There is considerable polarisation amongst Portugal’s most major (and thus influential) wine houses: For example, the giant family-owned Esporão has just finished converting its entire 600 hectare vineyard holding to certified organic viticulture. Conversely, Sogrape Vinhos (one of the biggest port shippers, and owner of brands including Sandeman, Offley, Casa Ferreirinha & Gazela) is dedicated to Integrated Production. – a farming system designed to reduce but not exclude synthetic treatments, that is as yet unregulated by the European Union. Sogrape’s Director of Research and Development, Antonio Graca, is frequently outspoken against organic agriculture – which he has been known to describe as “unsustainable” and “killing the planet”.

A common complaint, especially amongst wineries in the Douro valley, is that there is a critical shortage of vineyard workers – and that conversion to organic viticulture often requires a doubling in the workforce to achieve. Again, opinions are polarised. Dirk Niepoort asserts that this “excuse” is weak, and notes that even on the vertiginously high patamares (the modern, bulldozer-created terraces that can be up to 5 metres high) it is quite possible to use machines to perform all-important tasks such as weeding (important in the absence of herbicides). Of course, producers such as Niepoort and Esporão have deep pockets compared to smaller, artisan growers.

What is clear is that Portugal’s many wineries, large and small, are at very different stages of awareness when it comes to environmental and sustainability issues. The strength of the Integrated Production lobby (surely connected to the fact that chemical companies can still do good business from selling synthetics, unlike organic or biodynamic production which only requires copper and sulphur) is noticeable. A full discussion of the pros and cons of Integrated Production versus organic or biodynamic agriculture is beyond the scope of this already overlong post, but suffice to say it hinges around the perceived dangers of copper use in the vineyard – and the need to have an overarching position on sustainability that goes beyond mere vineyard work. It’s worth mentioning that Integrated Production doesn’t regulate what goes on in the cellar in regard to additives or use of added sulphites, whereas organic and biodynamic certification programmes both enforce a more stringent approach than the base EU regulations.

Here are some favourite wines tasted at this years’ Simplesmente Vinho, together with brief notes on the growers’ viticulture methods. The aim is not to make value statements about individual growers – this information is provided simply to illustrate the range of opinions and viticulture. 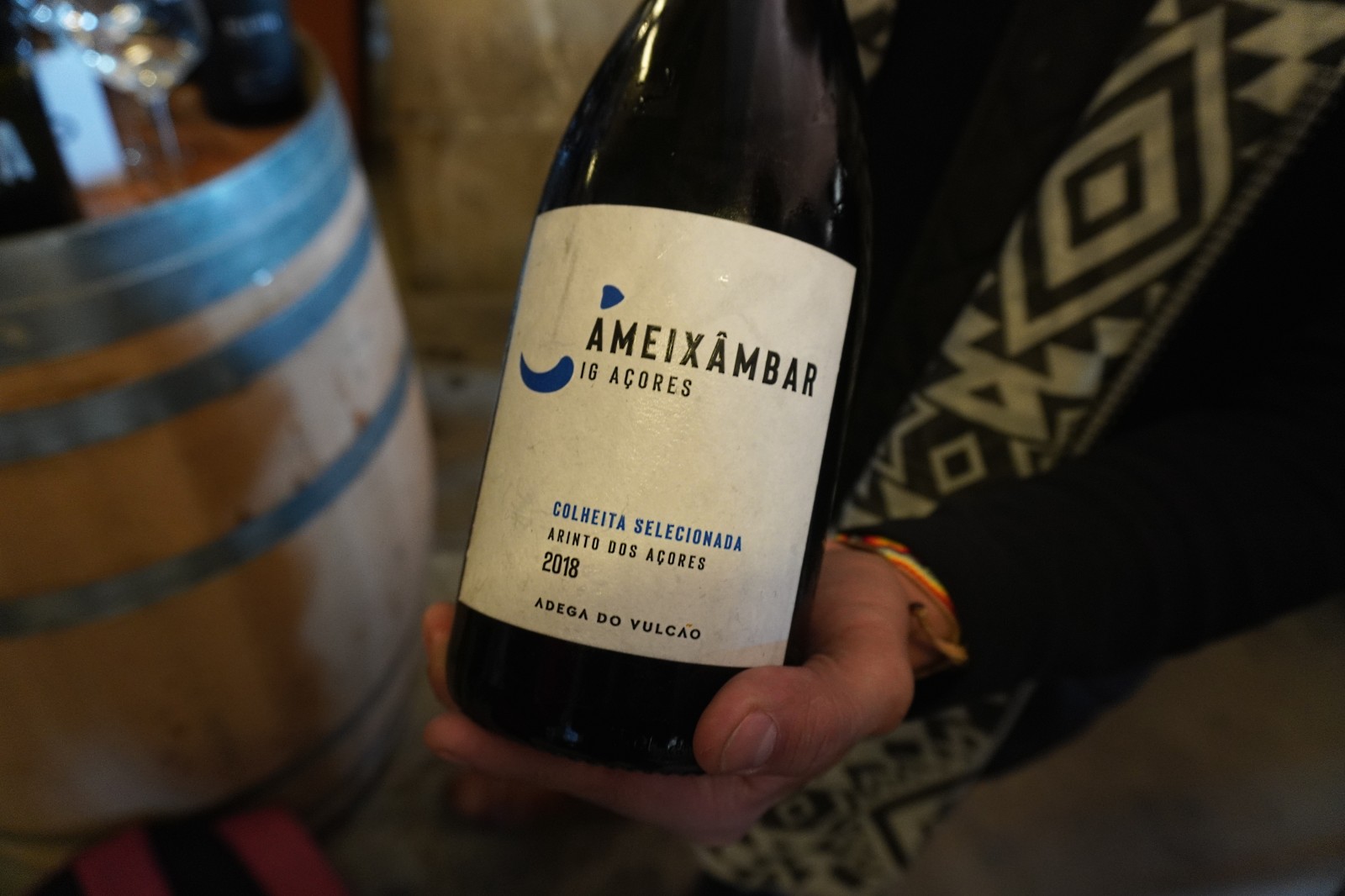 I was super excited to discover Adega do Vulcão – the first artisan winemaker doing something really serious in the Azores. Rodolfo Silva is not only farming responsibly, but also making delicious, atlantic-influenced wines with very minimal intervention. His Arinto (from Pico) is one of the most exciting wines I’ve had from the island so far. He also makes an excellent Arinto Reserva from the neighbouring island of Faial.

This is André from Quinta do Montalto (Tejo), with his Medieval de Ourém 2017 – an ancestral red/white blend where the white grapes begin fermenting in a barrel, and red grapes are thrown on top a bit later when they’re harvested. It’s got lovely freshness, sweet fruit and a bit of structure. 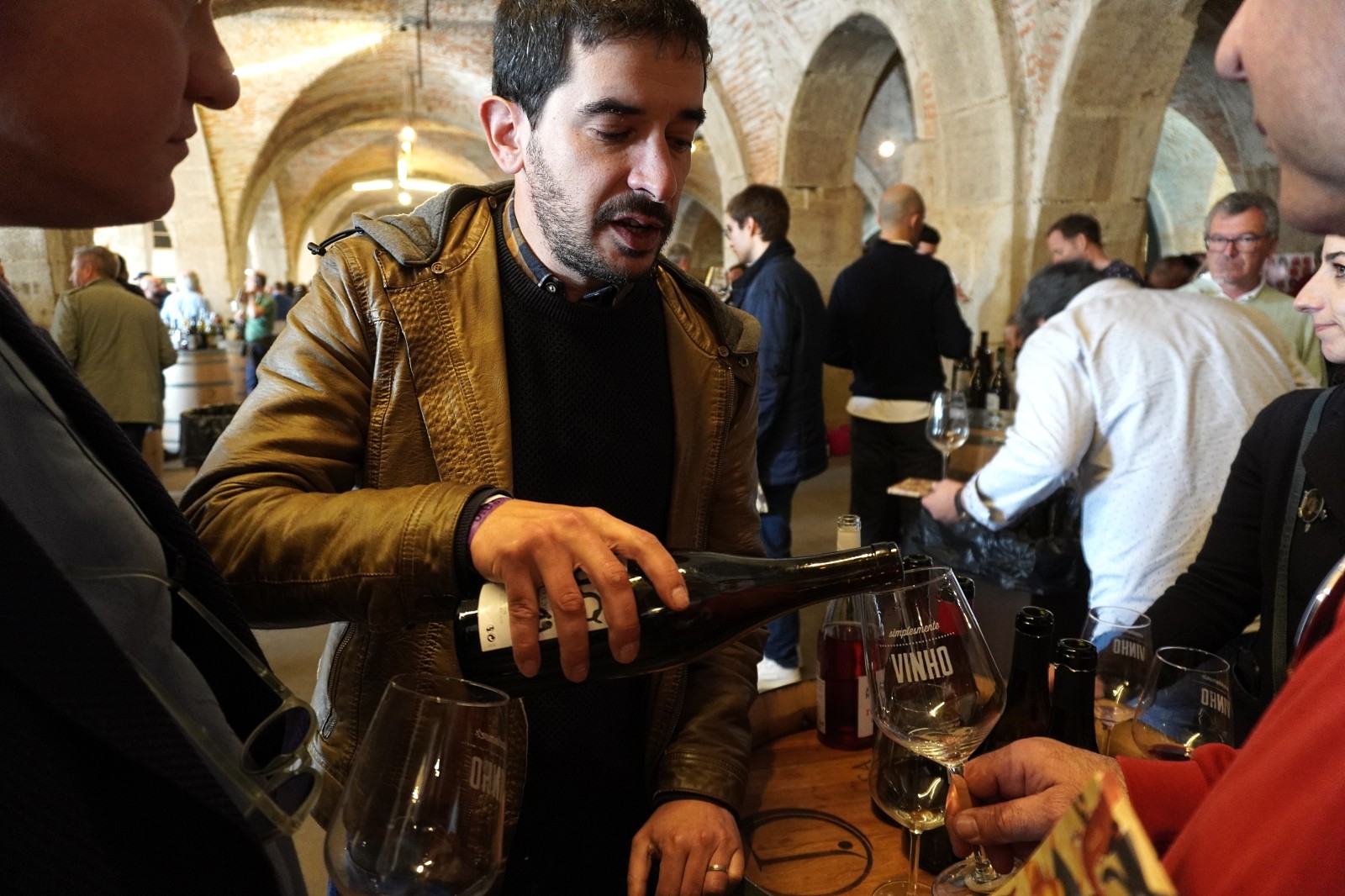 Antonio Madeira’s 2018 Vinhas Velhas Branco might just be his best yet (and the 2016 was pretty stellar, the 2017 no slouch). The perfect balance between ripeness, lift, texture is just heavenly. 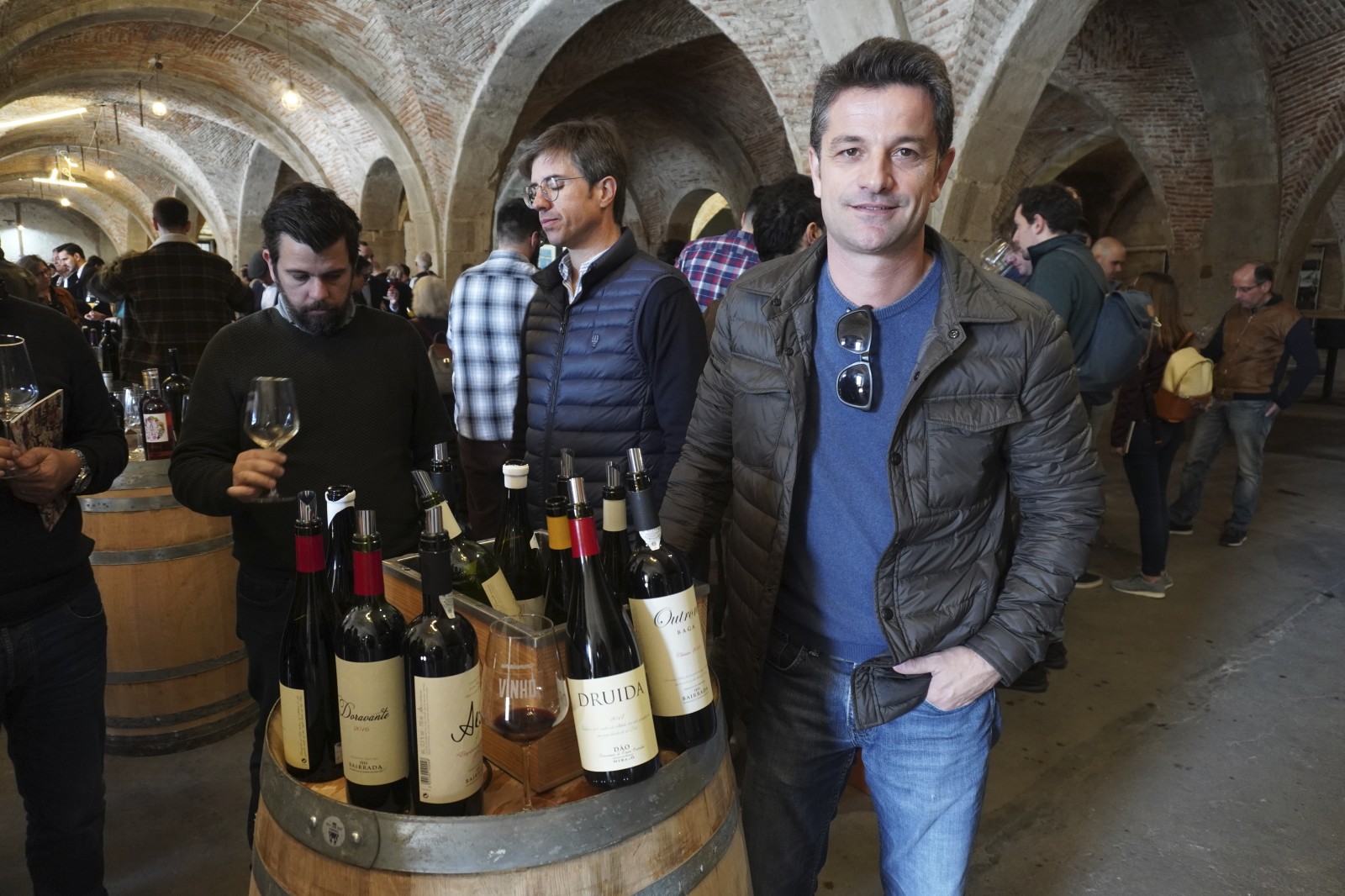 Justification: “It’s not possible to be organic in Bairrada”. 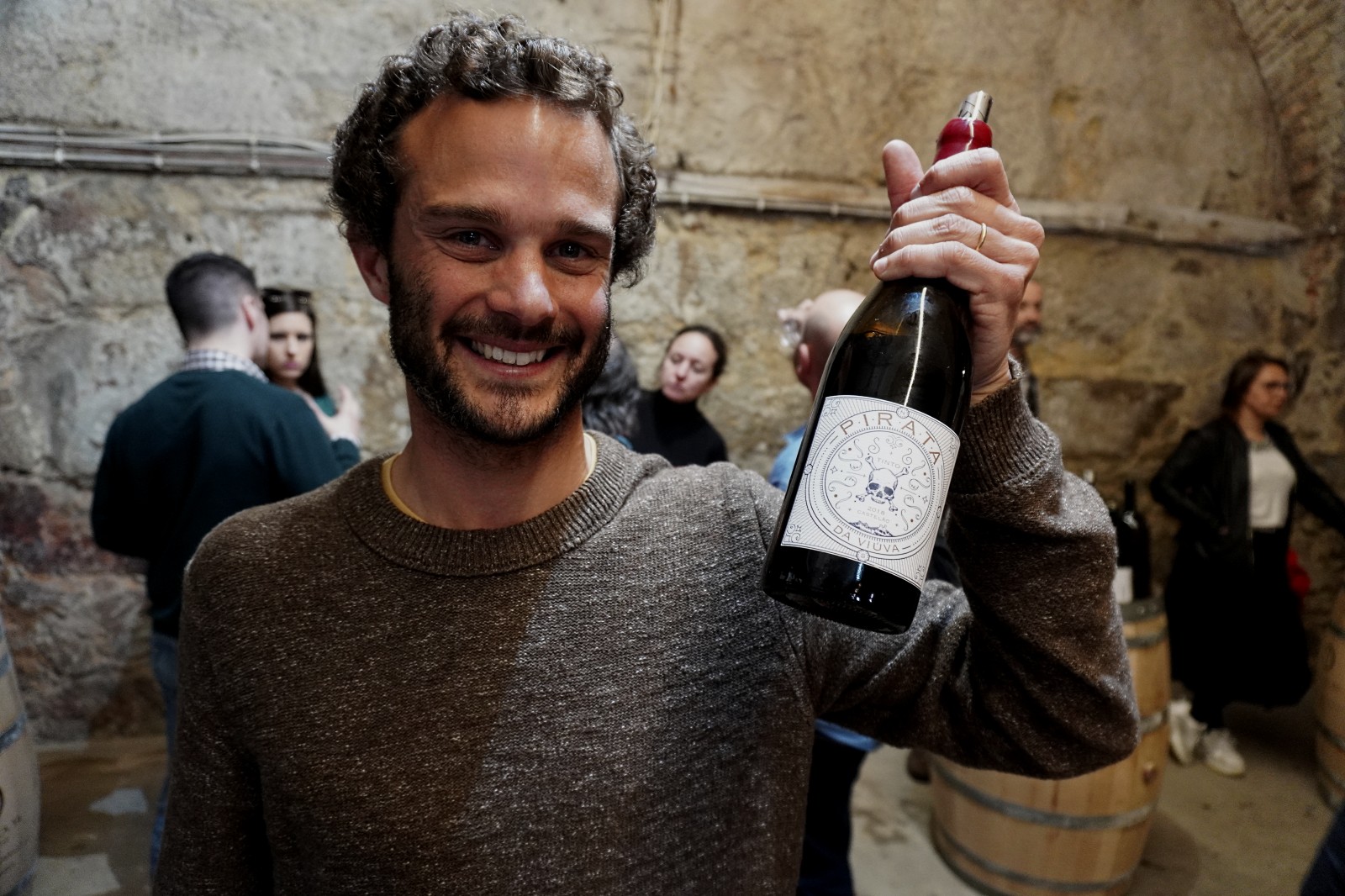 Pirata is a new non-Colares DO label from Viuva Gomes, made by Diogo Baeta. Here he holds their stunning branco – it’s Malvasia de Colares, grown on clay soils, but it still has that wonderful tight saline quality that I like so much in Colares wines. And only a refreshing 11% ABV. 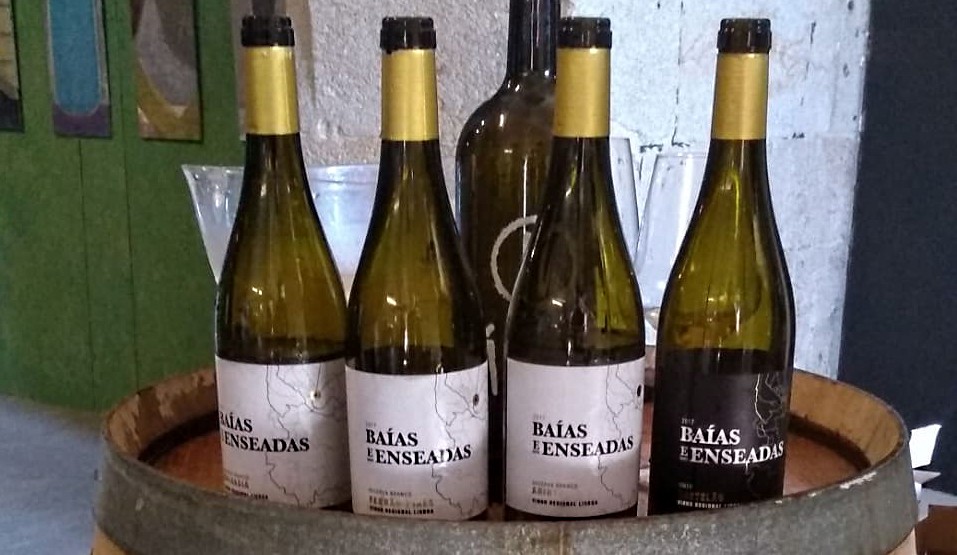 Daniel Afonso (Baías e Enseadas) has vineyards in the Colares area, but not on the hallowed sandy soils – so his wines are bottled under the broader Lisboa DO instead. Nonetheless, his Malvasia de Colares and Arinto show some of the elevated freshness and excitment that I associate with Colares. Really great wines.

Viticulture: was in conversion to organic, but thinking of abandoning it

Justification: lost 50% of the harvest in 2018 and doesn’t feel able to continue with the organic approach. 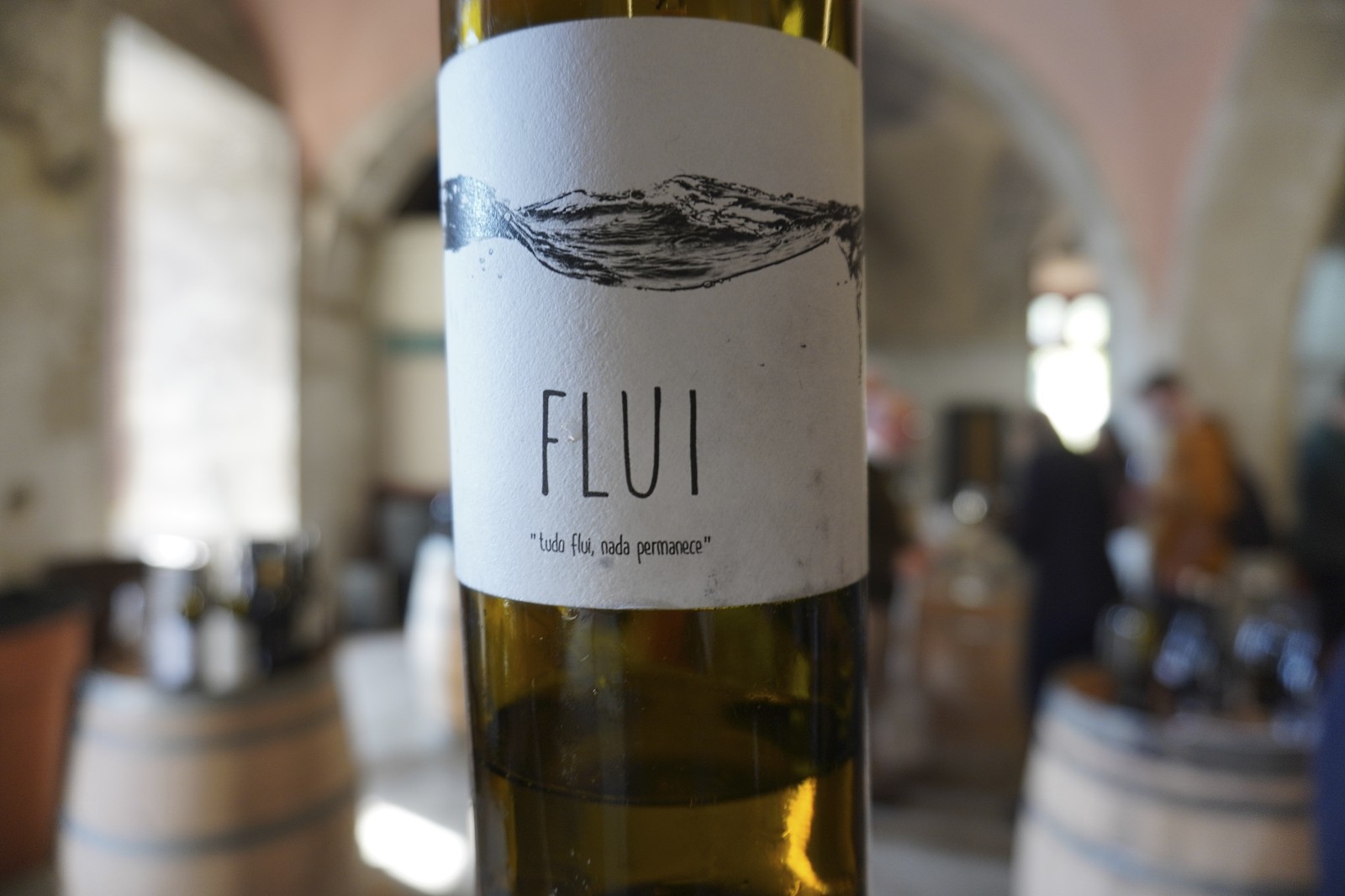 Flui 2019 A newish (first vintage 2017) collaboration from Rodrigo Filipe (Humus) and (???) – the grapes come from an old vineyard (field blend) near Serra de Montejunto. Brilliantly zesty with a chamomile hint and plenty of texture

Viticulture: organic certified for Humus wines, not 100% sure about this vineyard as Rodrigo doesn’t own it. 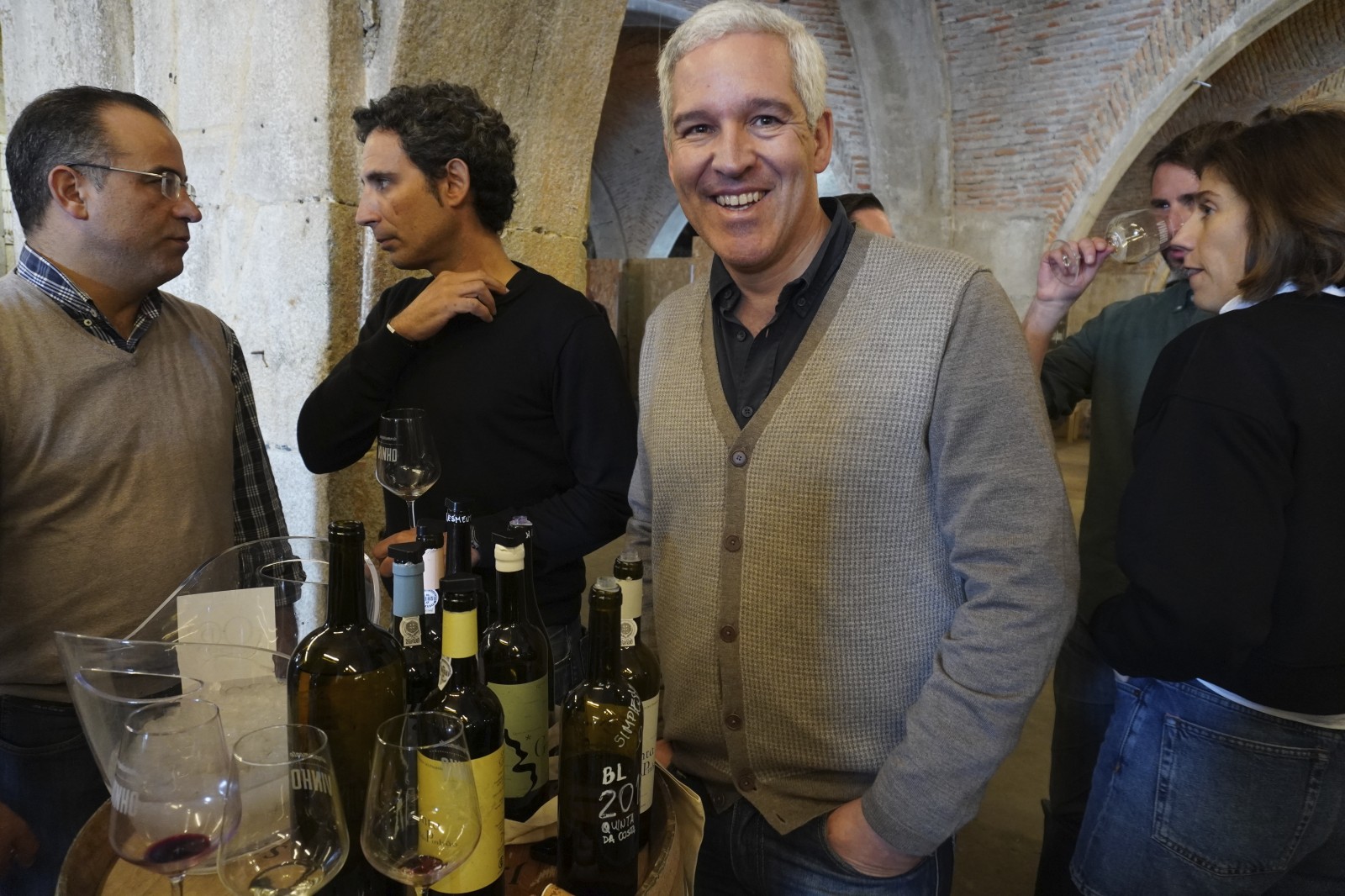 Really nice to see Miguel Morais (Quinta da Costa do Pinhão) at Simplesmente for the first time. His branco (actually an orange wine) is going from strength to strength and the new 2017 vintage (not yet released) is the best yet.

Justification: would like to be fully organic but struggling to find vineyard workers. Miguel is not full-time on his winery project, which makes this more difficult. 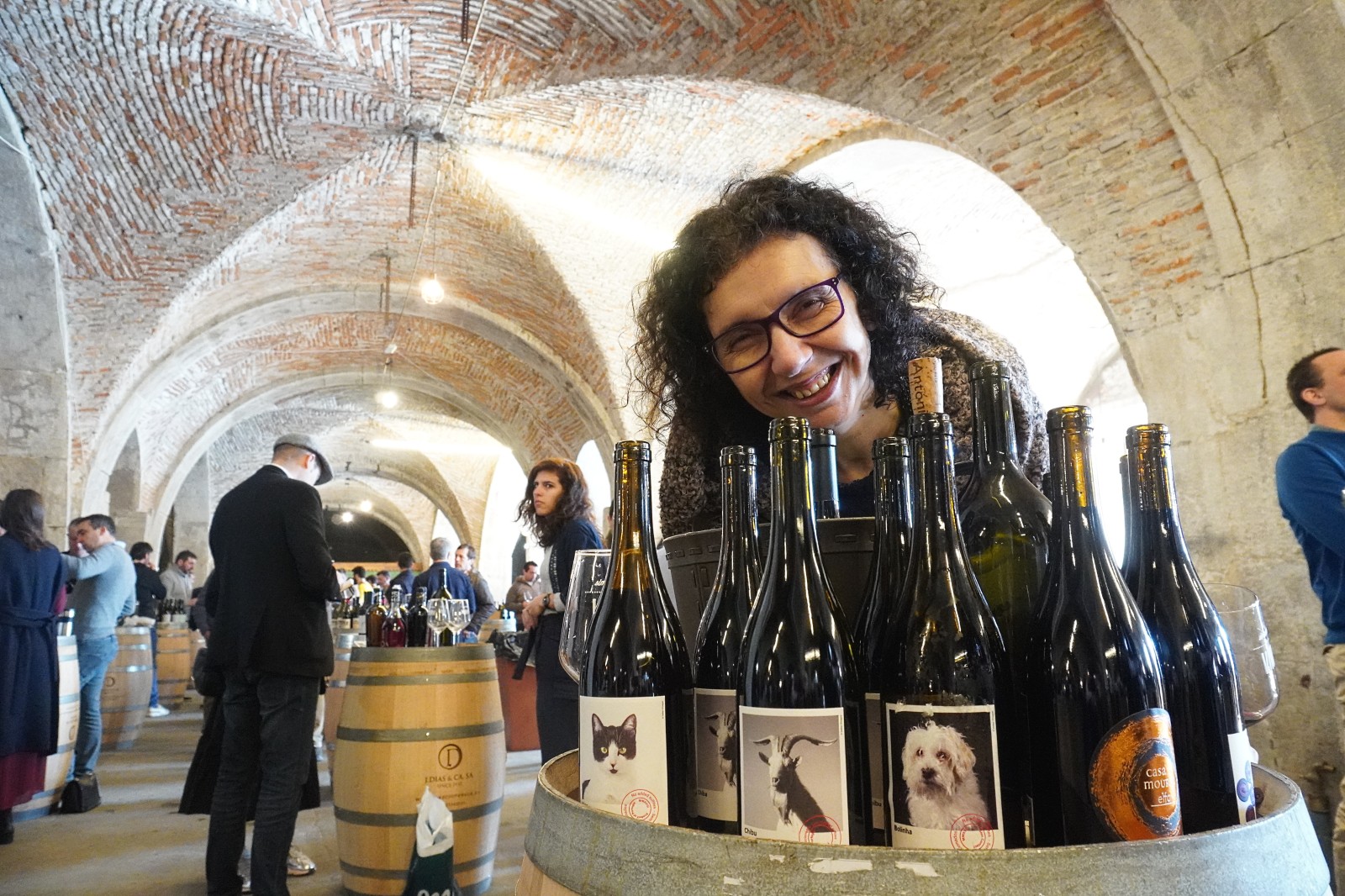 New no added sulphites wines from the wonderful Casa Mouraz. Yes they do turn into gremlins over night. But they are so tasty and aromatic that I think I can forgive them. And the labels are awesome. 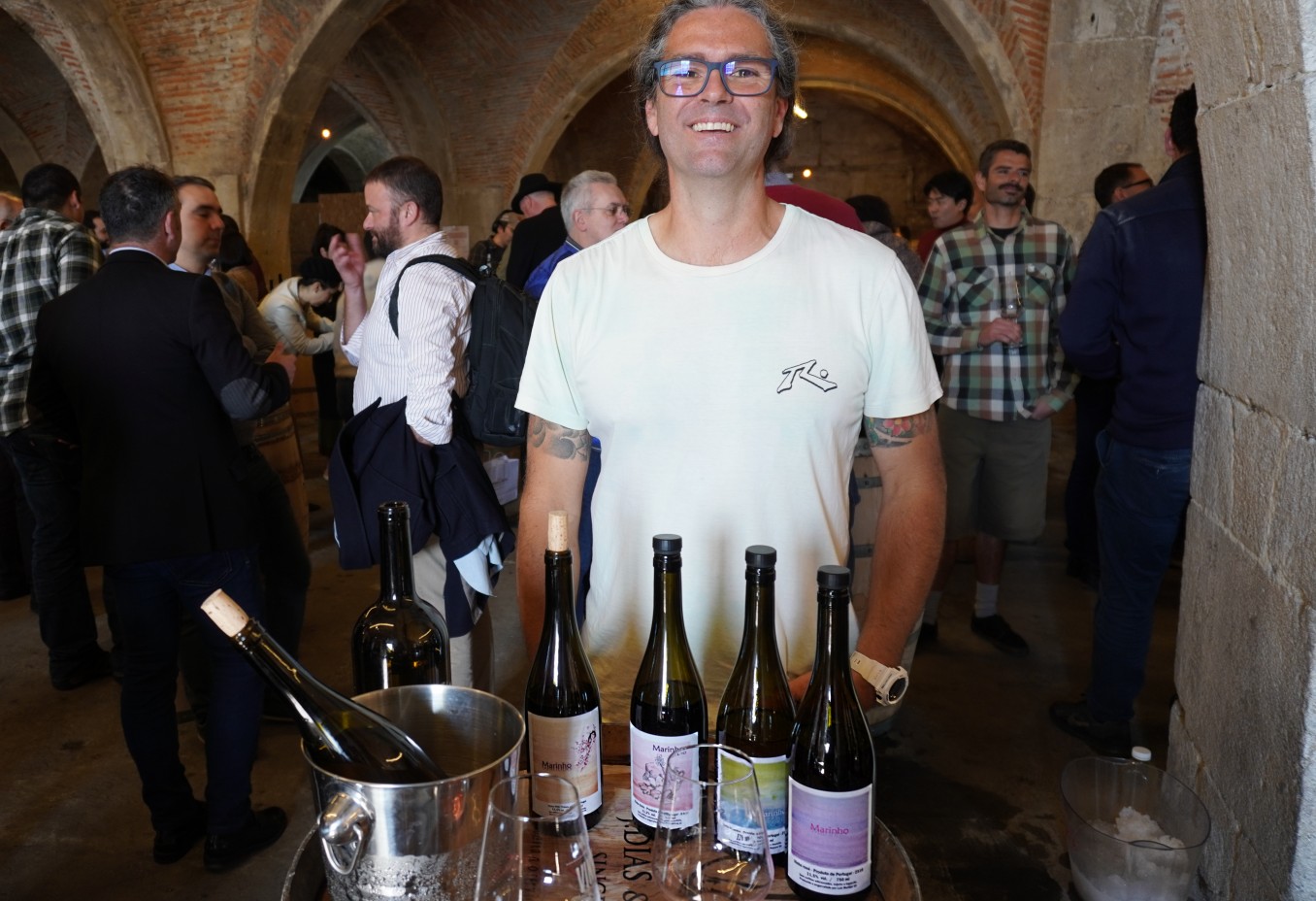 Luis Gil is being mentored a bit by Rodrigo Filipe (Humus) in his new project – Marinho. With no prior winemaking experience, he’s doing a great job. All his wines are featherweight, refreshing and charming, mostly under 12% ABV and all without any added SO2. They’re impressively pure by any standards.

Viticulture: organic (not sure if certified or not) 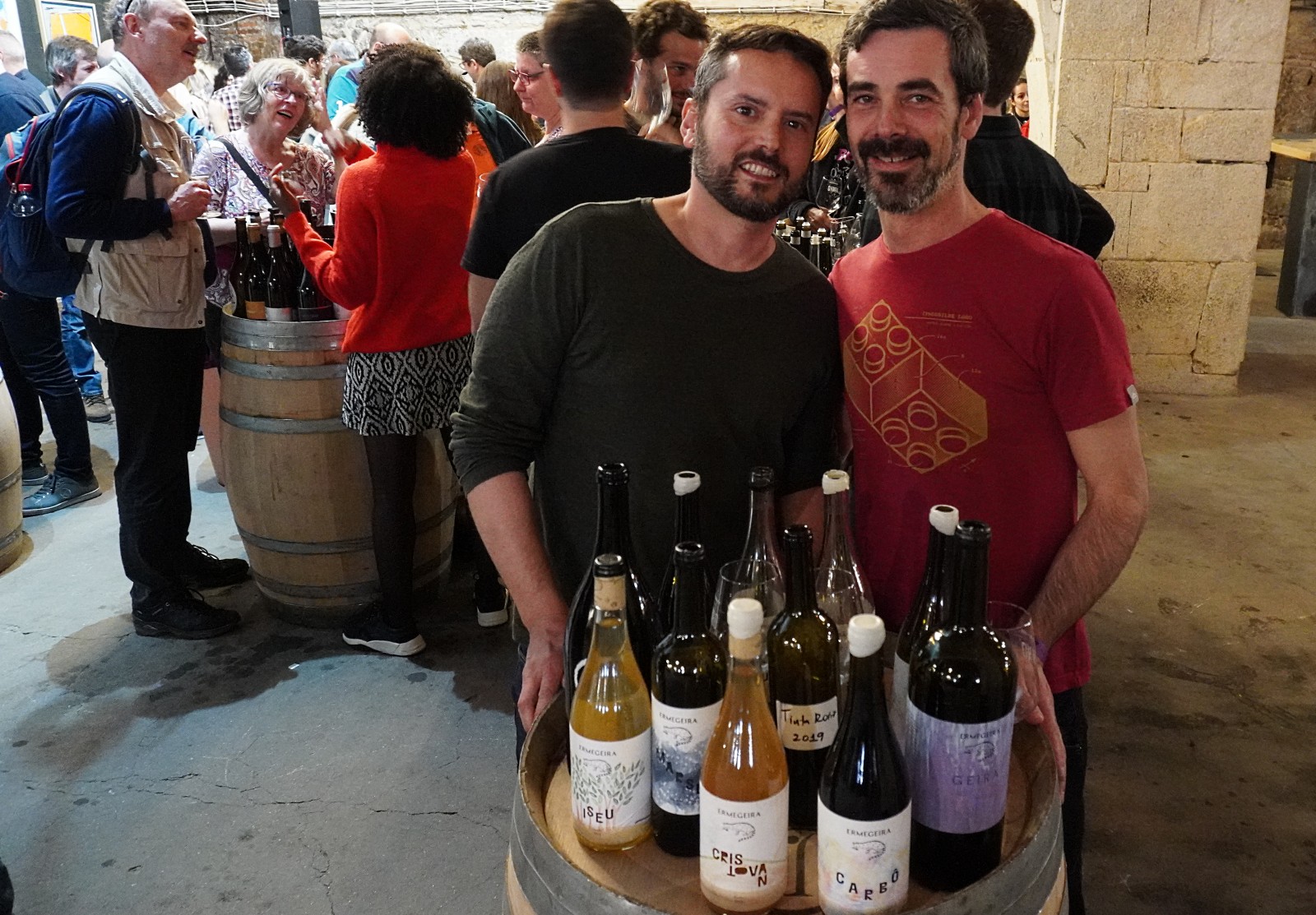 Ricardo Melo (left) moved back to the Lisbon area (from a life as a wine importer in London) to make wine under the label Ermegeira. His vintages (all 2018) show great promise, with fresh, lively characters. Some are a mite unstable right now, but hey – if you jump straight into no added SO2 winemaking, this is always going to be a risk.

Viticulture: organic, with some biodynamic practices

Inevitably, the question that echoes around my brain is this: Would I enjoy drinking some of these wines even more if the grower was fully committed to organic or biodynamic viticulture? The answer is twofold – on the one hand, I prefer the known to the unknown. While the jury is still out (or fighting) over the effects of pesticide residues in wines and other foodstuffs, I don’t wish to be a guinea-pig. But also importantly, there’s that nagging question at the back of the mind – You made a wonderful wine. How much more wonderful would it be, if it came from a naturally strong and healthy vineyard without any dependence on synthetics? Could it add that elusive 1% extra magic?

This is a difficult topic, with many snags, back-alleys and nuances. But organics, and the stricter and more holistic biodynamics methodology, do reliably seem to provide the best chance for vignerons to achieve 100% of the potential of their vineyards. Without this level of care, wine is often downgraded to a mere ‘beverage made from grapes’. 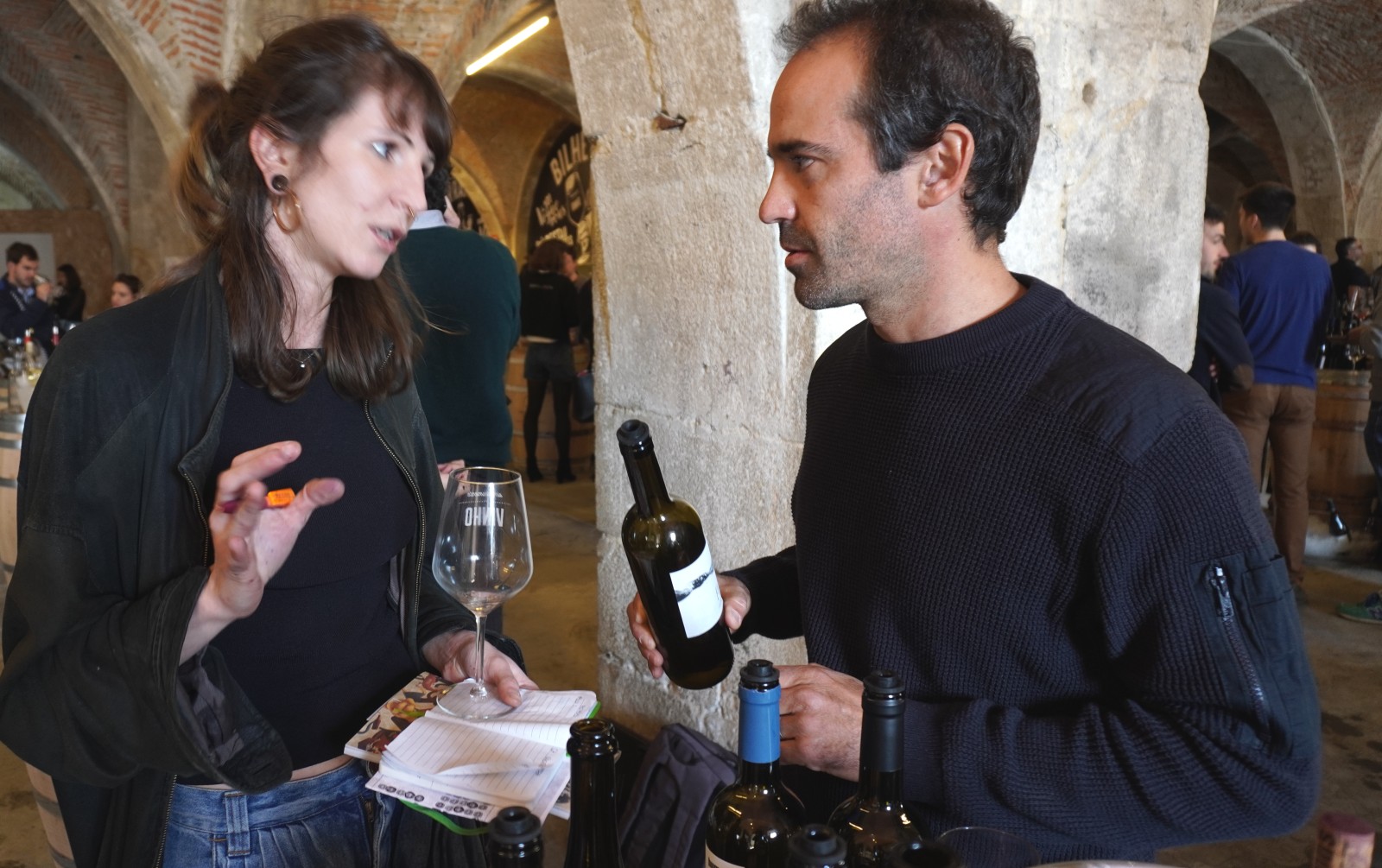 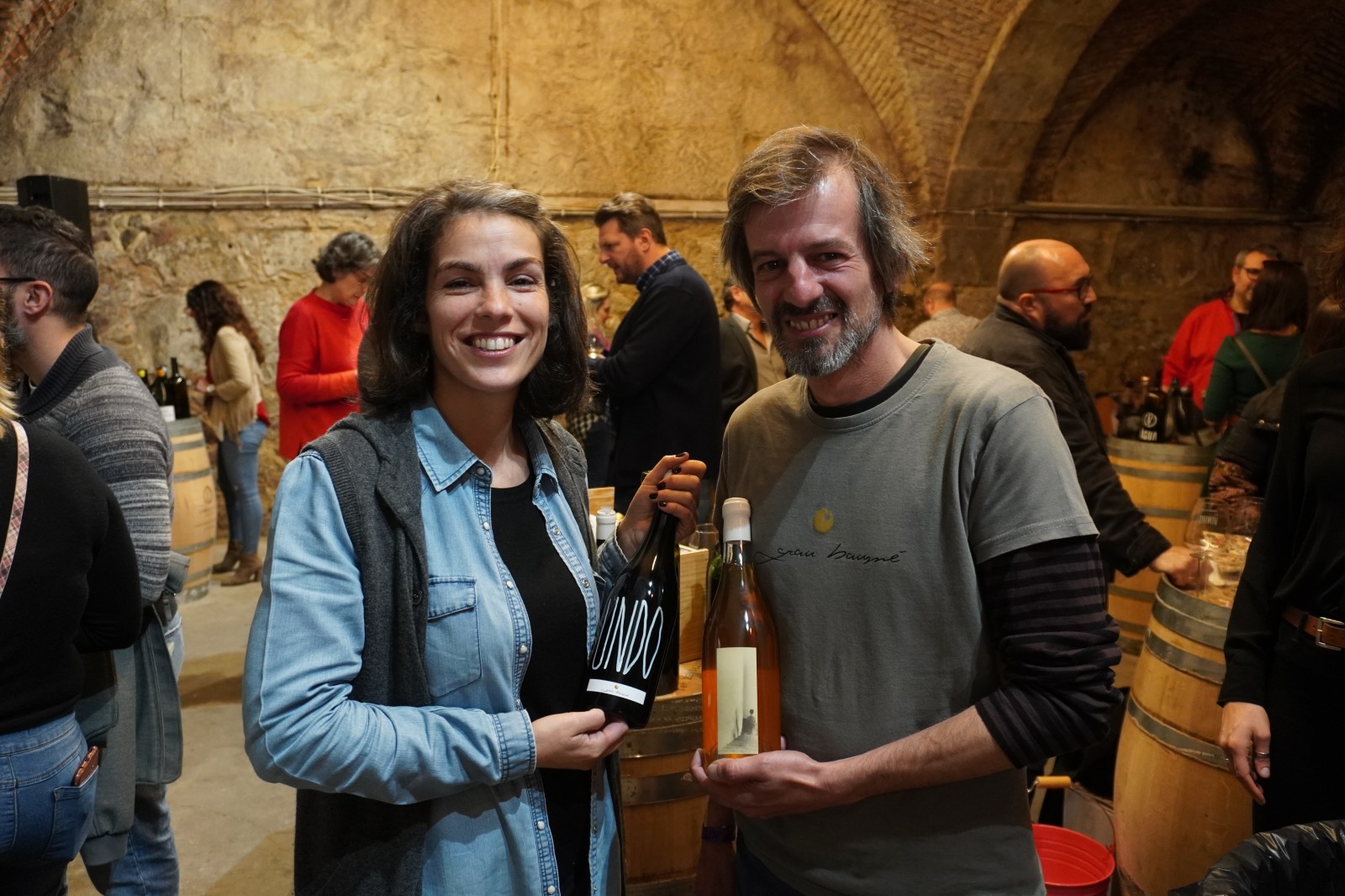 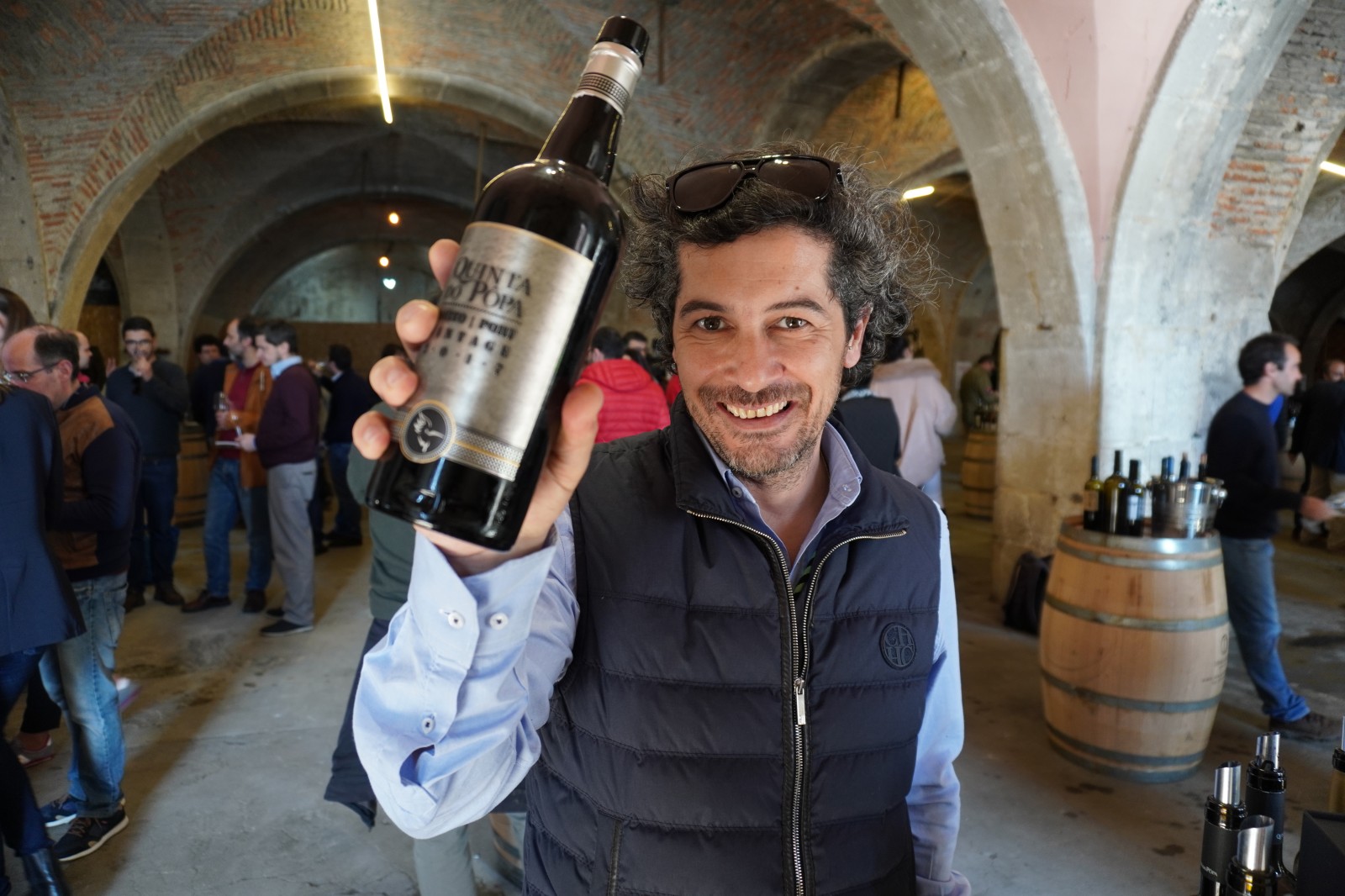 Reflections on a month’s drinking – #MyJanuary